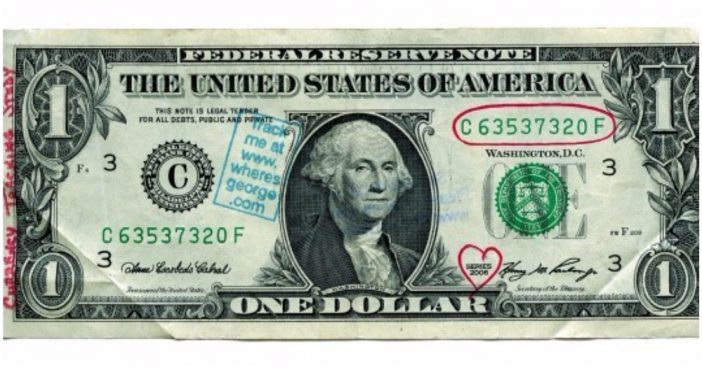 Dollar, the US currency is the most popular and powerful currency in the world. It is considered to be the pride of America. It consists of the cotton linen material which counts as one of the most distinctive features. It is quite contrary to many believers who generally think that the dollar is made from paper. However, besides this, there are certain other things about US Dollar that you need to know.

Not many people realize this, but Martha Washington was once portrayed on the silver dollar certificate. This is the one and only time a woman has been portrayed on American currency. Today, it could be worth over $1,000 if it’s in mint condition.

The first legal $1 tender note did not feature George Washington. Issued during the Civil War, the $1 note featured Salmon P. Chase, who was the Secretary of the Treasury at the time. You learn something new every day, right?

Over the past decade, the Federal Reserve has redesigned the $5, $10, $20 and $50 bill. Sadly, the $1 bill has received no love whatsoever. Currently, the only redesign in the works is the new $10 bill, which is likely to feature a woman for the first time since Martha Washington. The main reason the $1 bill has yet to be redesigned is due to the fact it’s rarely counterfeited.

6. Believe It or Not Our Currency is Not Paper

While our currency may feel like paper, it’s actually not paper at all.  According to the Bureau of Engraving and Printing, the U.S. currency is made from 75% cotton and 25% linen. Who knew? We guess if you have old money you’re not using you could knit it into a quilt.

The Federal Reserve has revealed that a $1 bill falls out of circulation every 5.8 years. The lowest lifespan for a bill is 4.5 years for the $10 bill, while the $100 bill has the longest at 15 years.

8. U.S. Currency is Covered in Bacteria

This statistic should make you reach for your Purell! According to a 2002 study by the U.S. Air Force, dollar bills are covered with bacteria. Some of the bacteria found could cause pneumonia and other harmful infections. This is why we use our credit card and leave the cash in the bank.

9. Money is also Covered in Cocaine

According to CNN, bacteria is not the only thing residing on our currency. In fact, 99% of the paper money in circulation has traces of cocaine on it. Also, money found in cities such as Los Angeles and Miami, had cocaine show up on the currency 100 percent of the time.

If you have a dollar bill that’s torn or absolutely damaged beyond repair, a bank will still replace it. In fact, as long as you have ¾ of the bill, you can have it replaced with a crisp new one. So don’t throw it away! You can even tape the bill together and the bank still has to take it!

Page Page 1 of 2
Previous article: 25 Things Kids Born After 1999 Will Never Understand
Next Post: 8 Horror Films That Are Inspired By True Stories