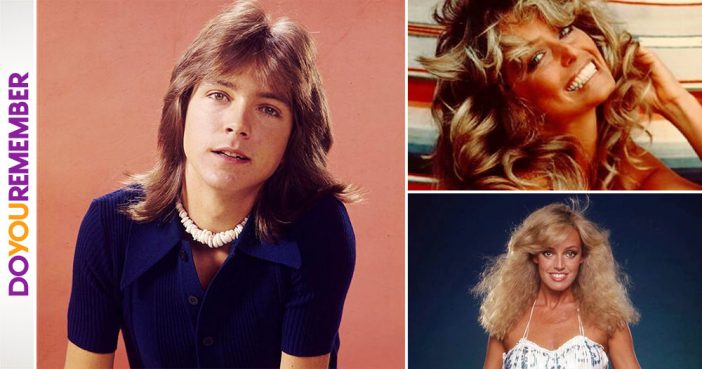 Forget Justin and Miley, the Teen Wolves and the Pretty Little Liars. For real pinup power, you have to back to the 70s. Shaggy hair, flared jeans and toothsome grins were trending, but instead of sending the latest pic to each other over Instagram, fans instead had to pass around treasured copies of Tiger Beat or 16. Today, we boogie back to those days, when Eight Was Enough, Charlie had his Angels, and pop stars aspired to be in you

The blonde younger brother on Eight Is Enough parlayed his TV soap success into a pop-music career and soft-core seduction in the film Paradise.

She shot to pneumatic fame playing sexpot receptionist Jennifer Marlowe on the sitcom WKRP in Cincinnati, with producers saying, She had a body like Jayne Mansfield and the overall sex appeal of Marilyn Monroe.

Needing a younger counterpart to Fonzie, Happy Days creators cooked up his teenage cousin, Chachi, in the fifth season, to keep younger viewers on the hook. Baio’s cocky, Italian-influenced bravado and winning charm made him a breakout star.

One of the top commercial models of the 70s, Anton could frequently be seen in magazines and on TV hawking such products as Muriel Cigars and Serta mattresses.

Named one of the most promising new actors of 1976, dark-haired Benson set hearts aflutter in Ice Castles.

Mega-teen idol Cassidy made everyone swoon singing “I Think I Love You” on The Partridge Family.

Fans everywhere wanted to plunge into The Deep with this English beauty.

David’s half-brother made sleuthing sexy as one of The Hardy Boys .

When she came out of the water in 10, her hair in cornrows, audiences around the world dropped their popcorn.

The fair-faced English lad became the young god of rock with his album Frampton Comes Alive!

The quintessential 70s beauty, this Angel’s poster could be seen in bedrooms across the country.

The hairy-chested younger brother of the Bee Gees made fans melt with the song “I Just Want to Be Your Everything”.

A new blonde Angel for Charlie when Farrah departed; the ratings confirmed she was just as alluring.

The Bandit gave sex a wink in the 70s, and showed fans his wherewithal with a nude shot in Cosmo

Charlie’s stunning dark Angel was a sophisticated vamp for a sensuous era.

This heartthrob seduced fans with his toothy smile, pop sound and TV success.

Her bikini shot became one of the decade’s most sensational images.