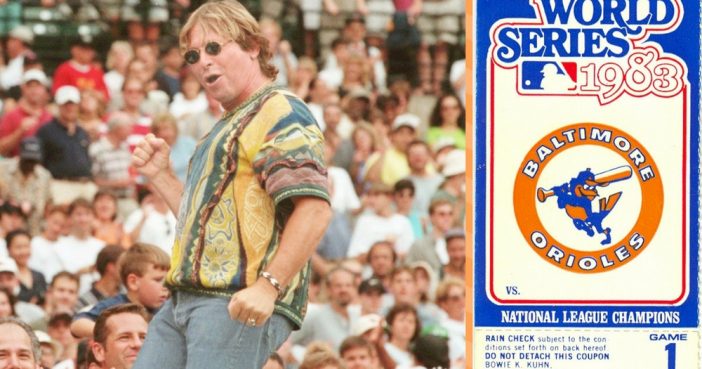 While it’s been 20 years since singer John Denver died in an experimental plane crash in Monterey Bay, Calif. — he died on Oct. 12, 1997 — his voice remains a part of a Baltimore tradition.

In 1983, Denver appeared on 33rd Street and belted out “Thank God I’m a Country Boy” on top of the Orioles dugout during Game 1 of the World Series at Memorial Stadium.

And on Sept. 20, 1997 — just three weeks before he died — Denver appeared in Baltimore for a benefit concert at the Baltimore Arena (now called Royal Farms Arena) and surprised baseball fans earlier in the day when he showed up at the Orioles game, dancing and mouthing along to “Country Boy” while atop the O’s dugout during the seventh-inning stretch.

Denver first recorded the song in 1975. According to a 1997 Sun story, the Orioles then put it on the sound system at Memorial Stadium.

“The whole thing started just by accident,” said Bob Brown, the Orioles PR director from 1968-1989. “Frank Cashen [then the O’s general manager] said, ‘I’m tired of all this old-timers music, with the organs. Let’s play something a little more current, try to get the kids interested.’ We experimented with a lot of seventh-inning-stretch songs. When we got a [strong] fan reaction from ‘Country Boy,’ we tried it again and again. And every time, we got the same reaction.”

John Denver did not always own the seventh-inning stretch in Baltimore. The Sun reported that “Twist and Shout” by the Beatles and “Shout” by the Isley Brothers were played during the stretch in 1987.

“Jacobs decreed that the Andrews Sisters’ with Dan Dailey version of ‘Take Me Out to the Ballgame’ would be played during the stretch,” The Sun account said. The fans did not like hearing this 1949 recording. “Country Boy” emerged again, triumphant, when Peter Angelos bought the team in 1993.