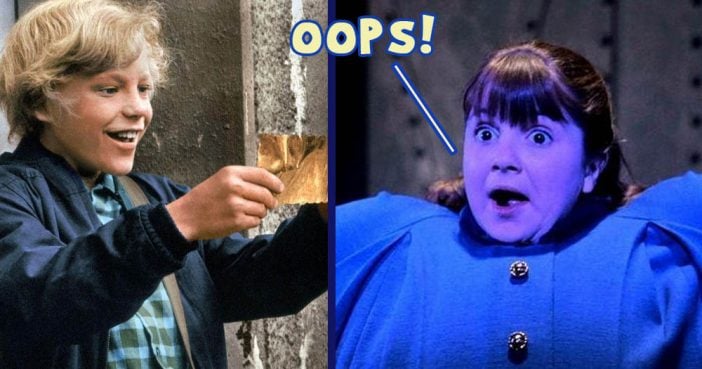 Willy Wonka & the Chocolate Factory was an American musical that was released in 1971, starring Gene Wilder as Willy Wonka. It was also one of my favorite movies growing up. The film told the story of a young boy called Charlie, who won a Golden ticket to visit Willy Wonka’s chocolate factory along with a few other children. This movie proved to be a huge success and still continues to be shown on TV around the world every year. Here are a few movie bloopers from the original Willy Wonka & the Chocolate Factory that you might not have noticed the first time around.

In this famous scene where Violet inflates, you can see the reflection of the blue light used to change Violet violet, in her hair. You can also see the pump used to inflate her feet

If you look carefully, the candyman accidentally hits one of the children in the face when he opens the counter in the song. He doesn’t look particularly worried about the fact he’d just hit a kid in the face, but he probably didn’t realize what he’d done.

Wonka already set the date of the factory tour? How did he know all the tickets would be found by October 1? Again, you’d have to pause the film right at this moment to realize, but it’s just one of the few mistakes in the movie that you wouldn’t notice any other time. In the scene where Willy Wonka walks towards the factory gates, there’s a strange jump in time. In the shot taken from the back, we see Wonka walk across the shadow of the building but when the shot changes to the front, the shadow is further back than before, not even crossing the carpet he was walking on.