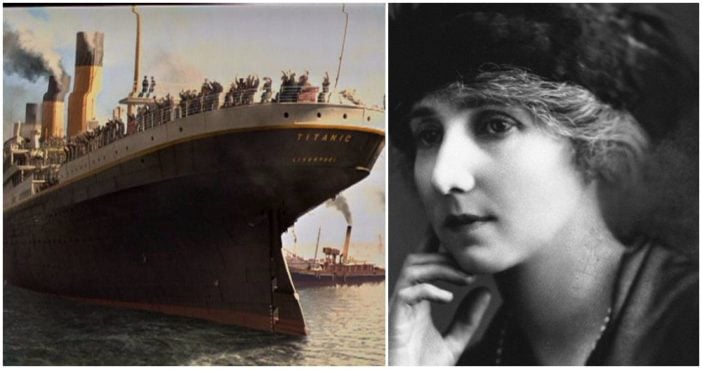 The unthinkable happened when the RMS Titanic sank in the North Atlantic on April 15, 1912. The ship considered unsinkable was constructed and sent ashore with many hopes and dreams. But when this largest ship in the world hit an iceberg at 11:40 pm on 14th April, it led to a disaster unparalleled in the maritime history.

The sinking of Titanic has inspired the movie by the same name where Jack and Rose have their dizzying romance before the disaster separates them forever. That story still has its allure. But did you know there were several different people aboard with their own stories which the world probably doesn’t even know? Here are some stories from the world’s most ostentatious ship that still inspires awe and curiosity.

Jack Phillips’ role as the senior wireless operator on the day the ship sank has been lauded as well as negatively criticized. He decoded messages from passengers on the ship as well as other ships ahead of them. He was also responsible for relaying weather information to the Captain. Phillips had already received some warnings from other ships to watch out for an iceberg on the way. In fact, when SS Californian delivered the warning, Phillips shouted, “Shut up! I’m busy working Cape Race!” Passenger messages were flowing in thousands and Phillips remained under the impression that the junior wireless operator, Harold Bride, had already conveyed the iceberg warning to Captain Smith.

But the information had never reached Captain Smith. As the medley of misconception, misunderstanding and miscommunication played out in the RMS Titanic, the ship collided with the giant iceberg that sealed its fate. However, once Phillips realized what had happened, he worked literally till the last moment to send distress signals to nearby ships. His message to Carpathia (the ship that eventually came to the rescue) saved 705 lives. He died that night just before sending out a signal to the rescue ship.

James Moody was a lower ranking officer with a very modest salary. Nevertheless, he stayed throughout the disaster, launching one lifeboat after another. Moody was a hero in true sense because he was asked to man one of the lifeboats he launched and get passengers to safety. However, he chose to stay on board and gave the opportunity to reach the shore to another officer.

The only reason he remained on the ship was to see to it personally that the maximum lives were saved. Moody was the Sixth officer and he stayed back to assist the First officer. He was alive till 2:18 am, the very last minutes before the ship went down.

3. The Countess Of Rothes

One of the wealthiest and esteemed travelers on Titanic was Lucy Noel Martha, the countess of Rothes. She was on board with her cousin and maid, making a journey to the US to be with her husband and children. As soon as the news of ships drowning reached the Captain, he directed the Countess to go for the safety belts. The Countess and her companions were led to the first lifeboat launched in the sea.

The sailor of Lifeboat 8 recognized the Countess and knew her to be a great leader. She immediately took control of the boat for the rest of the night. She swapped places with her cousin for a while to console a Spanish wife whose husband got left behind. She not only steered the boat to safety, but also spoke words of encouragement to those in the boat. She stayed back in Carpathia as well to oversee the safety and well-being of the survivors. The sailor and the Countess had that day etched in their memories and communicated with each other until the Countess passed away.

There were two distant cousins on the ship on the night of April 15th, and neither of them was aware of the other. While they shared the same great-great-grandfather, William Edwy Ryerson and Arthur Ryerson were economically poles apart. Arthur was a first class passenger travelling to Cooperstown, New York with his wife and three children. William, on the other hand, was a steward in the first-class dining salon.

William manned the lifeboat 9 and reached to safety. Arthur’s wife, daughters and a son made it on the lifeboat as Arthur had to remain on the ship. He passed away as the ship went down.

Father Francis Browne was a first class traveler and one of the 8 passengers who got down early at the ship’s final port of call of Queenstown (now known as Cobh) in Ireland. Despite not making the entire journey, the Father is now famous for all the pictures he took while on the ship. His pictures revealed various moods and colors fleeting across the fancy ship. He captured the best of the voyage and since the day Titanic sank, the pictures have circulated round the globe.

His story is probably one of the most heartrending one. Millar chose to be an assistant deck engineer on Titanic after his wife’s death just three months before the voyage. He had two sons whom he left behind with their aunt. He gave his sons, Thomas and Ruddick, a penny each to spend while he was in US, preparing a new life for and with them across the sea. Unfortunately, Thomas passed away on board. His son Thomas kept the penny as a reminder of his father’s undying love for them.

These newly-weds were two of the many passengers who initially disbelieved that the ship was sinking. Titanic’s grand promise of being a vessel that could never sink was etched in their minds. Hence, it took a couple of serious warnings to shake them off their misconception.

The couple was on their honeymoon when they were forced to separate. Fortunately, while Ethel was sent out on a lifeboat, Edward swam his way to safety by reaching a rescuing boat. Luckily, their married life continue.

8. The Two Waifs Of The Sea

As survivors were being attended to on Carpathia, two unidentified children roamed amidst the helter-skelter. An account later revealed that since the men were not allowed on lifeboats until the very end, these two little boys were separated from their father who died that night.

Later, when their faces flashed on newspapers requesting identification, a frantic mother from France came forward for them. Her boys were kidnapped by the father who wanted to take them to US for a new life.

Edith’s strong instincts told her that something bad was soon going to happen. In a letter to her secretary, she even mentioned the nagging sense of foreboding she couldn’t shake. She had boarded the ship from France after covering French fashions at Paris’s Easter Sunday races. She just wanted to relax for a bit, but more than anything, Edith wanted to get off the ship as soon as possible.

Her premonitions were not without reason. Just as soon as she was asked to leave the cabin and head for a lifeboat, she asked a steward to help her get her pig-shaped music box from her room. Being in first-class she was given one of the first lifeboats and privilege to get on it to be safe. However, she declined and wouldn’t leave until all the women and children on this ship were safe. But when someone mistakenly threw her music box in a lifeboat, she was forced to get on it as she didn’t want to separate from her most cherished possession.

Alex became famous for not making the journey that led to so many deaths. Titanic was advertised to be once-in-a-lifetime opportunity. People were envious of those who got to make the voyage. But not Alex. He almost got into it, repeatedly ignoring the crystal clear voice ringing in his head, asking him to not make the journey as he would most certainly die in it. Finally, before the last call, Alex stepped out and went home to give an explanation to his parents who had gifted him the ticket as a present.