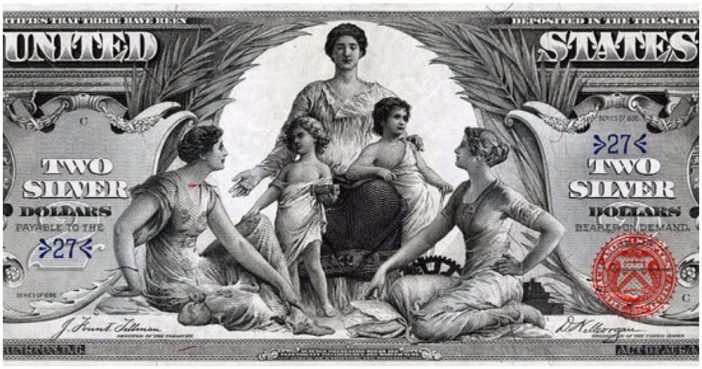 The artists painted their work on large canvases before teams of 15 to 20 engravers would recreate the pieces on banknotes. One example is this $1 bill, which gave the Educational Series its name. The woman here represents “history,” while the boy represents “youth.”

This $2 bill is entitled “Science Presenting Steam and Electricity to Commerce and Manufacturing.” In 1896, The New York Times described it thusly: “The centre figure is Science, a woman in Greek garb. To her right stands an infant grasping a small throttle, and to her left another bearing a galvanic coil. Commerce and Manufacture, two graceful women, stand ready to receive Steam and Electricity, respectively.”

“The winged figure of a woman, ‘America,’ stands upon a globe, her feet touching the map of North America,” explained the Times. “In one hand she holds aloft an electric lamp, fed by a ribbon floating in graceful curves to a bursting thundercloud. Additional allegoric figures are ‘Jupiter,’ representing force, standing upon the backs of a span of spirited steeds, ‘Fame,’ proclaiming the nation’s progress through a long trumpet, and ‘Peace,’ with her dove.”

The $5 banknote is particularly admired by collectors. “It is still the single most popular set of U.S. currency,” said Manifest Auctions Director of Banknote Auctions, Manning Garrett. “Many notes are rarer and many notes are more valuable, but the educational set is always the most popular.”

Page 2 of 3
Previous article: Check Your Pockets: Some Of Those Dimes Are Worth $1.9 Million
Next Post: 10 Retro Celebrities’ Workouts That Still Get Results