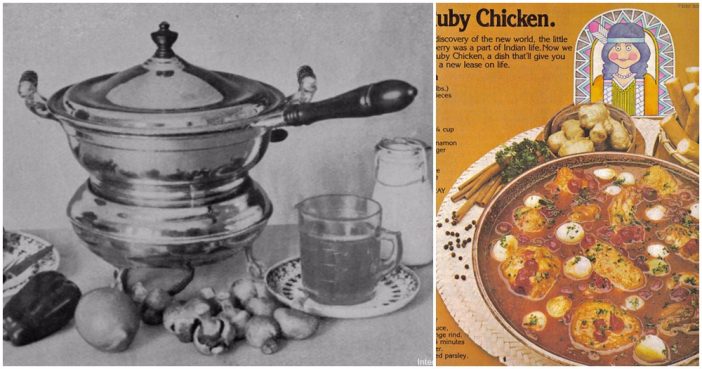 As tastes expanded from meatloaf and potatoes to more unsuaul dishes, it’s no wonder that a few exotic recipes became wildly popular. 20 years before, these foods would have been unheard of at any dinner party. Even spaghetti was once a “foreign food” so it did take some time for these recipes to make it into nearly every dinner party. While some of these dishes have been around quite a while, they all spiked in popularity during in the disco era. Here are some distinctly ’70s recipes that we still enjoy today!

Cast aluminum bundt pans were invented in 1950, but they did not immediately catch on. It took a stellar recipe, created by Ella Rita Helfrich in 1966 at a Houston bake-off before women all across America were baking ring cakes. Helfrich’s tunnel of fudge cake has that raw or gooey type of chocolate center that just makes you go, “mmm.” This wonderful treat was a classic in the late ’60s and early ’70s. Here’s the recipe.

With a history going back to the late 19th century, this creamy dish hit its pinnacle of popularity in the ’70s. You hardly ever hear about this main dish these days, but back then it was considered very sophisticated. Cream, sherry, mushrooms, and chicken make this one unique for the era. There was a time when most people had tasted this wonderful dish, but it rarely found in restaurants or at dinner parties these days.This recipe calls for the traditional vol au vent base.

Since the ’70s was the time to show off your cooking skills with something less predictable than meatloaf, it makes perfect sense that quiche began its rise to brunch stardom at this time. If you can make a pie then you can make a quiche. Now found in nearly any U.S. coffee shop that serves food, this French dish is common these days. If you don’t already have a surefire quiche recipe, then click here.

Page Page 1 of 3
Previous article: 10 Great Comedies From The 80s You May Have Forgotten About!
Next Post: Which Designing Woman Are You?