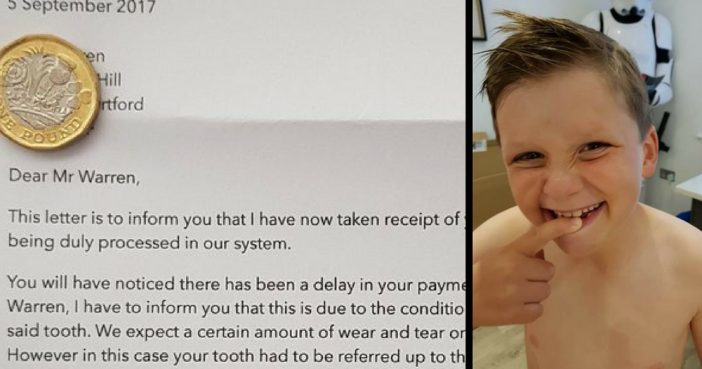 Any parent will tell you that enforcing cleanliness and dental hygiene can be quite the task when it comes to little ones.

However, one father came up with an ingenious way to encourage his wayward son into more regular brushing.

Henry Warren, a father-of-three living in London, became frustrated at his son’s haphazard approach to teeth cleaning and so devised a plan with the help of the tooth fairy.

“Our son is dreadful at brushing his teeth. Turns out the Tooth Fairy has had enough”

Our son is dreadful at brushing his teeth. Turns out the Tooth Fairy has had enough pic.twitter.com/4WWmBvuo22

Instead, Henry, posing as Barry T. Tooth Fairy, ‘delayed’ the payment and when he finally delivered the pound coin in exchange for the tooth he also left a letter.

The formal note addressed to Henry’s son explained that there had been a delay in the payment due to the sub-standard quality of the tooth.

It reads: ‘We expect a certain amount of wear and tear on the teeth we appraise. However, in this case, your tooth had to be referred up to the committee for further analysis.

‘We believe this is due to the lack of care and attention by yourself. We have detected more than trace amounts of Fanta and residual amounts of both cereal and chocolate which have not been removed by appropriate brushing technique.

‘We recommend you review your practice here as a matter of urgency.’

Page Page 1 of 2
Previous article: IKEA Founder, Ingvar Kamprad, Dies At 91
Next Post: 17 Things You Thought Were True, But Have Actually Been Debunked By Science