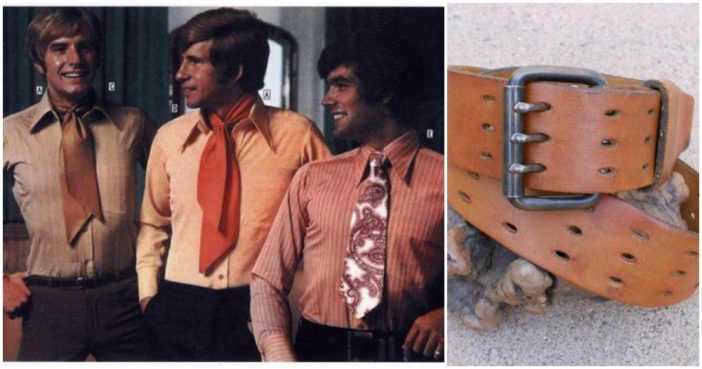 I’m always fascinated by the obsession with retro clothing and fashion. As someone who graduated from high school in the late ’70s and from college in the early ’80s, I was old enough to make conscious fashion decisions and purchases in both decades. Honestly, for me, the fashions of the ’80s and the MTV generation (and my 20s) win hands down. Whether it was skinny ties, popped collars, down vests, or whatever, the fashions you see in The Breakfast Club and Sixteen Candles resonate with me a lot more than those in Dazed and Confused and Saturday Night Fever; I was always more of preppie than a hippie (or disco guy), so naturally the ’80s with its cleaner, generally dressier look, worked better for me.

REBEAT, however, is a magazine that mainly focuses more on mid-century music and culture, and so in keeping with the spirit of the magazine, I’m going to limit myself to the clothes of the ’70s. Because what’s considered retro by my co-staffers here at REBEAT were the fashions of my formative years, I’ve picked 10 items that men wore (though women wore many of them as well), and I’m going to tell you why some of those ’70s fashions weren’t all they’re sometimes made out to be. Some of that stuff was cool, some of it okay, but a lot of it was pretty ghastly. It’s easy to look back on fashion fondly when you didn’t have to wear it to school every day, and many children of the ’70s have spent a considerable amount of time hiding those old pictures of themselves in ’70s fashions and trying at the same time to make sure that whole decade is far behind in the rearview mirror.

Initially, these were more in the fashion realm of hippies in the ’60s, but by the 1970s they had become mainstream and every middle-class kid in America was wearing them. They started as flares, but over time became more and more bell-like, often reaching enormous proportions.

I’ll have to admit they looked pretty cool as jeans, but when they started making them with vertical stripes and in plaid they started to lose me and a lot of other teenagers as well. And as cool as they looked, I promise you that if ever wore a pair and got them wet, you’ll know they suddenly didn’t feel so cool; it was like having two wet sandbags strapped to your legs.

I once read where a fashion writer said, “The only men who should wear open-toed shoes or sandals are gladiators and Jesus.” I agree wholeheartedly, and in the same spirit, I’d say puka shell necklaces should only have been worn by women, despite David Cassidy’s ability to make every teenage boy in America feel like he just had to wear them too.

These necklaces made of little white shells from the beaches of Hawaii looked pretty cool when they broke big everywhere in the 1970s. Like Birdwells (below), these were first popular with the surfing and beach-going crowd, and then slowly worked their way inland to people who’d probably never seen a beach, much less been to Hawaii. Over time though, it seems like the guys who wore them were middle-aged men who wanted to seem young, and like many fashions started by the young and adopted by the old, they quickly went by the wayside. I can tell you though, there was nothing like the sight of a deeply tanned girl in a bikini at the beach wearing these stark-white beads against bronzed skin. Nothing.

Almost overlooked in the pantheon of ’70s footwear, the Dingo boot was an early ’70s addition to a male teenager’s wardrobe. Durable and rugged with just the right amount of toughness, but cool, too. Everybody from Joe Namath to O.J. Simpson to Ed Marinaro shilled for Dingo, and they were the must-have boots for a while there. In junior high, I seem to remember having a pair almost exactly like the ones Broadway Joe is wearing the in ad pictured here, but I don’t recall ever having another pair afterward.

I think the window for coolness was pretty limited on this one, and I think that’s because, like the “leave the sandals to gladiators” analogy above, men’s boots are really better suited for cowboys, soldiers, and people who actually need them for work.

Not every article of clothing looked like it was appropriate for wear either at a Foghat or a Bee Gees concert; we had beachwear back then, too. We were always a little slow to get fashion on the East Coast that was Beach-based, so despite the fact that Birdwell started making their famed “Beach Britches” in 1961, they didn’t hit the East Coast (or at least where I lived in South Carolina) until the mid-’70s. But boy, were these the hot item when they did!

Prior to that most men’s bathing suits were often made of cotton, and those tended to cling and stay damp for what seemed like a very long time. But Birdwells were durable and available in a limited range of bright colors and eventually patterns, too. My first pair was bright yellow, and I had several pairs throughout high school and college — I wouldn’t wear anything else. Birdwells were made of the kind of nylon material that almost every bathing suit is made of today, but they were a lot softer then. Sadly, though they still make these, I saw a pair in a surf shop a couple of years ago and the material seemed a lot stiffer and more cumbersome than I remember. Not everything changes for the better. You have everything that was bad about ’70s fashion rolled right here into one item: the ’70s silk shirt. Actually, for most people they weren’t really silk (that was expensive) and were instead made of sweat-inducing polyester. With the garish prints and the long-pointed collars, and basically made to be worn open a few buttons down, these were grotesque. I’m not sure anyone who wore them looks back on these nostalgically, and they’ve become somewhat of a running joke. Yeah, I know, you may actually think these look pretty cool now, and a lot of people did then, too. While silk shirts with pointy collars were for the late ’70s disco crowd, bell-sleeved shirts were for the early ’70s jeans, beads, and chukka boots group. They actually did look pretty cool, I guess and were often worn with bell-bottom jeans. Usually, these shirts had a two or three-button cuff that was longer than a man’s traditional one-button cuff, a concession to style, I suppose because there was no real reason for it otherwise. The downside of these shirts was that they snagged on things a lot and often that meant they ripped pretty easily — which is probably why they weren’t around all that long.

Maybe everything that was bad about the ’70s wasn’t actually rolled into that silk shirt after all — there’s some left over here. Ties were as wide as five inches, and being the ’70s, they were usually polyester.  I said above I preferred ’80s fashion a lot more, and one reason was they moved back to a medium-width tie first, then they went really narrow. Wide ties were not a good look, and good riddance on this one also. I can’t understand why anyone would have liked this look at all.

I never understood the need to complicate something as simple as a man’s one-hole leather belt, but I guess a lot of things are done in the name of fashion that in reality aren’t all that practical. These days I have trouble getting one post in the hole to put my belt on, but in the ’70s, we had three to insert.  These were all the rage in the ’70s, and while they weren’t very practical I have to admit they looked pretty good with those bell-bottom jeans.

Before the ’70s I think pretty much only baseball players wore these, but soon they became popular with athletes and non-athletes alike. Initially, you saw them worn as plain t-shirts, but they eventually became popular with a Led Zeppelin, Black Sabbath, or another band logo on them. They hung around a lot longer than most ’70s fashion, though.

Apparently, these were designed by the British Army as desert boots for soldiers fighting in World War II. With a slight design modification, these were sometimes called Wallabees in the civilian world (see picture), and these comfortable shoes were worn by both men and women, and by the 1970s, they were made of suede and often had crepe soles. Like all suede though, once they got wet, they weren’t the same, especially if your elephant-leg bell bottom jeans were retaining a gallon of water and drenching your feet. Oddly enough, these have become popular once again, though they are often listed as desert boots. They have a lot more options than suede now, and in fact, many are made of plain leather these days. Maybe it says something about the quality of fashion that a good product will still be around long after its trendiness has worn off. You can’t say that about most of the items above!

Obviously, I’ve only talked about a select few items here, and perhaps some time I’ll write about my next 10, including platform shoes, colored Levis cords, and Ban-Lon shirts. Until then!

Check out our video of some wild trends from the 1970’s!