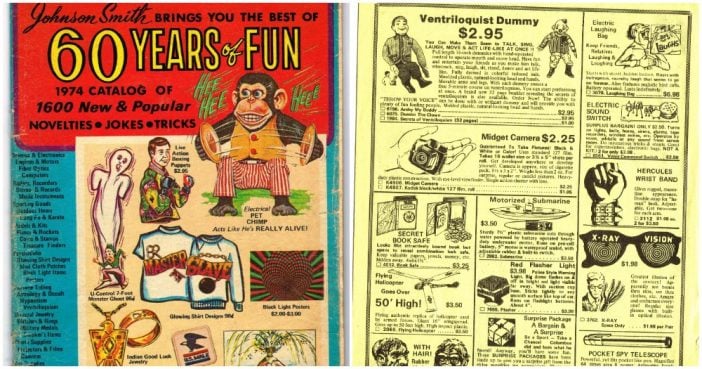 For juvenile pranksters, reading through a Johnson Smith Company catalog was like hearing a voice from heaven. Yes, children, there really is gum that tastes like garlic and candy that turns your mouth bloody (or, at least, fake blood). And nobody made these tricks, gizmos, jokes and marvels look more appealing that the people at Johnson Smith.

Alfred Johnson Smith began selling novelties in Australia in 1905, but the Johnson Smith Company dates its official founding to 1914, when Alfred set up shop in Chicago, Illinois, USA. Back then, the technology might not have been as impressive (no midget cameras, electric shock pens, or TV remotes shaped like bikini girls), but the pitch was the same: practical jokes and other novelties, sold on the cheap for kid-sized allowances.

No matter what the decades brought – Depression, war, Baby Boom, and so on – there was always a place for the Johnson Smith Company. Since there was no actual “Johnson Smith Store,” the company became the stuff of kiddie legend.

Some swore it didn’t even really exist-it was just too good to be true (a theory supported when someone’s “Build Your Own Hovercraft” instructions got lost somewhere in the mail, not that someone is still bitter about it twenty years later or anything). But it was hard to argue with the appeal of “Unbeatable Self Defense” books, 1000 Tiny Magnets, Slot Machine Banks, “U-Control” 7-Foot Life-Size Ghosts, Rubber Masks (“With Hair!”), and The World’s Smallest Harmonica.

The Johnson Smith Company shifted locations over the years (only adding to its aura of mystery), eventually settling in Florida in the mid-80’s. The company still operates there today, still publishing its catalog of “Things You Never Knew Existed.”

And while a few modern items seem more in tune with a Sharper Image catalog (Pocket Digital Cameras, Titanium Watches), Johnson Smith hasn’t forgotten its bread and butter. And by “bread,” we mean “Motion Activated Fart Alarm,” and by “butter,” we mean “Remote Control Hand With Extending Middle Finger.” You just don’t mess with the classics.

Previous article: 10 Surprisingly Wise Words From Pop Culture Witches
Next Post: Mother Hires a Nanny For Her Son, Only To Realize Later She Was Princess Diana