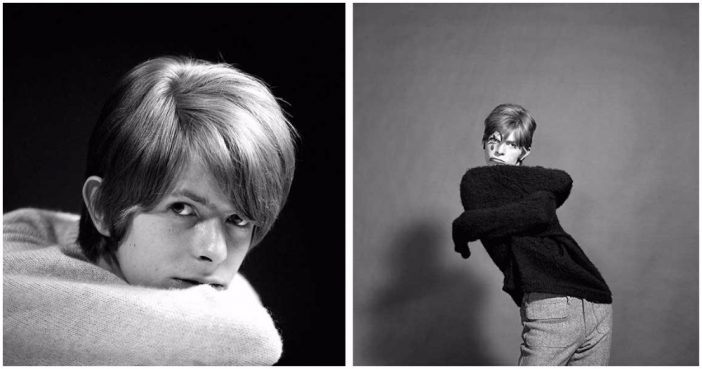 These early photos of David Bowie were shot when the star was just 20-years-old.

Bowie Unseen offers a rare glimpse of pre-Ziggy Stardust Bowie. Or David Jones, as he had been known until earlier that year. (The singer famously changed his last name to “Bowie” in 1967 to avoid being mistaken for David Jones, the lead singer of 60s pop-rock band The Monkees.)

The book’s images were taken by photographer Gerald Fearnley, during a shoot for the album cover of Bowie’s eponymous 1967 debut record. Fearnley had been introduced to Bowie by his brother Derek, a rising musician, the year before. The two would often crash at Fearnley’s house in London, where they would write and rehearse.

Bowie was 20 years old at the time and is pictured wearing plain sweaters and trousers. (The colorful Kansai Yamamoto costumes would come later). But the shoot was an early chance for Bowie to explore his more experimental side (see: the hats and clown-like makeup).

Bowie was also studying mime in 1967, under legendary British performer and choreographer Lindsay Kemp. “He was an A student,” Kemp told The Guardian in 2016. “He fell in love with the bohemianism of my world.” That bohemianism can be seen in Fearnley’s images and would go on to characterize Bowie’s career. One of the portraits even foreshadows Bowie’s future Pierrot the clown character, as seen in the music video for “Ashes to Ashes.”