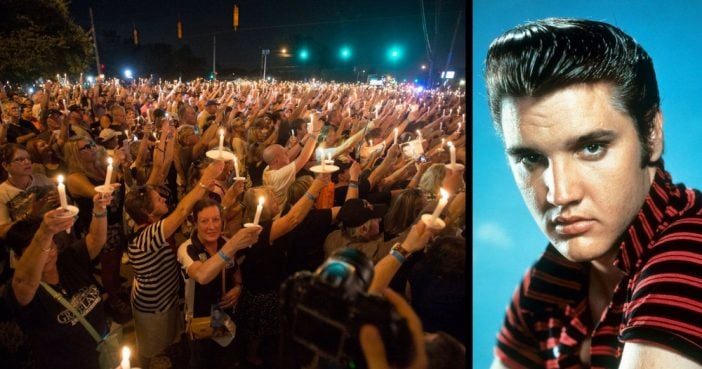 Thousands of fans of Elvis Presley gathered at his iconic Memphis mansion, Graceland, on Tuesday to honor “the King of Rock” a day prior to the 40th anniversary of his death.

The vigil was attended by Elvis’ former wife Priscilla Presley, 72, who was snapped mingling with attendees in the afternoon.

Priscilla Presley holds a child while greeting fans at Graceland. Image via Pinterest

Lisa Marie Presley, Elvis’ only child, was also at the memorial alongside 10-year-old twin daughters Harper Lockwood and Finley Lockwood. The 47-year-old rocker lit candles with mourners, joining them for a procession throughout the grounds of the 13.8-acre estate — which includes the graves of Elvis, his parents and his grandmother.

What are the theories behind Elvis’ cause of death? Click “Next” to find out.