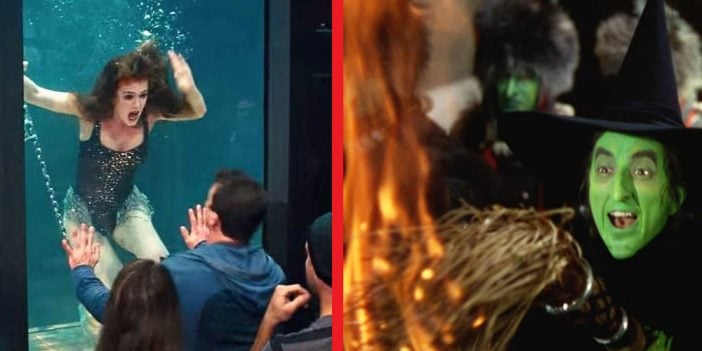 When we watch movies, especially action ones, we often think that it’s unbelievable that actors have such scenes to play. Their roles seem amazing, but we often realize it’s not entirely real. However, sometimes, actors really need to do dangerous maneuvers to perform their greatest roles. Some decide to leave it to professional stuntmen and women, but some are so brave that they take on these lethal scenes on their own. And that’s why we love them. They do this only for the sake of entertaining us. That’s credibility, right there! Let’s take a look at some of the bravest actors who went above and beyond for our viewing pleasure.

You may be surprised to learn that we almost lost America’s sweetheart, Tom Hanks, during the filming of Cast Away. The beloved actor, on top of dramatic weight loss (and gain), severely cut his leg while shooting a scene. Such a brave man!

This brave actress nearly lost her life while filming an intense action scene forTitanic. Kate and her partner, Leonardo DiCaprio, had to sprint for their lives as rushing water fills up a thin corridor. This is what happened. Kate’s thick jacket, unfortunately, got stuck on a gate that she was supposed to get through and was nearly drowned. Now that’s commitment!

The 1995 thriller, Se7en, was an instant classic as soon as it hit theaters. But what many are unaware of is that Brad Pitt damaged one of the tendons in his arm after accidentally smashing through a windshield during a take. As you may have noticed later on in the film, his character is wearing a cast. And it’s totally real! How cool is that?!

The stunning actress herniated a disc in her back when she was in the midst of a backflip for the movie, Aeon Flux. The injury was pretty intense, and she nearly damaged her spinal cord permanently. This resulted in her doing multiple weeks of physical therapy which, in turn, stopped production on the entire project until she was given the all clear.

Channing Tatum’s intensity on the set of the movie Foxcatcher somehow worried the director, Bennett Miller. Bennet was pretty honest about one such scene: “He punched that thing with his head three times and shattered it, and put his head through it and through the frame behind the mirror and through the drywall that the mirror was hanging on and left a divot two inches deep.” Intense!