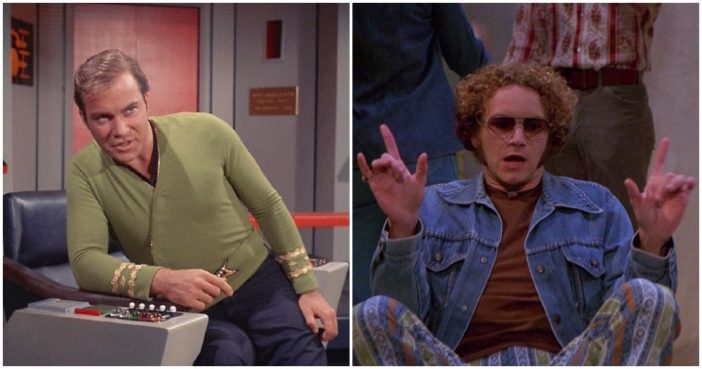 Every sitcom seems to have that one character in sunglasses who’s supposedly awesome. But, if you think about it, most of them are actually pretty lame.

What we thought was cool about Captain Kirk was his swagger. But, perhaps that swagger isn’t exactly justified when you consider what a terrible captain the guy really was. In the three seasons of the original Star Trek, 59 of Kirk’s crew members died. Suddenly, his cocky attitude wasn’t so much “cool” as it was delusional.

2. Greg from “The Brady Bunch”

You can chant, “groovy” all you want, Greg, but it won’t make us forget about that super lame singing group you fronted with your five brothers and sisters. Come to think of it, I never saw you with any kids your own age. You were just hanging out with your younger siblings all the time. Confirmed: Greg Brady was totally lame.

Let’s just ignore this dude’s ridiculous mullet for a second, and focus on the fact that high school dropout Uncle Jesse lives with his wife and kids in the attic of his brother-in-law’s house. I thought he was moving into Danny’s home to help him raise those three girls after their mother died, not to mooch free rent. Also, the guy once crashed his motorcycle and broke his arm because he was sad about a bad haircut. Uncle Jesse’s not a role model; he’s a basket case.

4. Zack Morris from “Saved by the Bell”

All the high school shenanigans and talking directly to the camera don’t excuse the fact that the supposedly “coolest kid in school” Zack Morris, HANGS OUT WITH THE PRINCIPAL ALL THE TIME. If, at sixteen years old, you’re spending your weekend trying to help Mr. Belding through an argument with his wife, you’ve lost the privilege of ever calling yourself “cool” again.

Page Page 1 of 3
Previous article: Cate Blanchett Confirmed To Star In Lucille Ball Biopic
Next Post: Can You Complete the Titles of these 1960’s Romantic Movies?