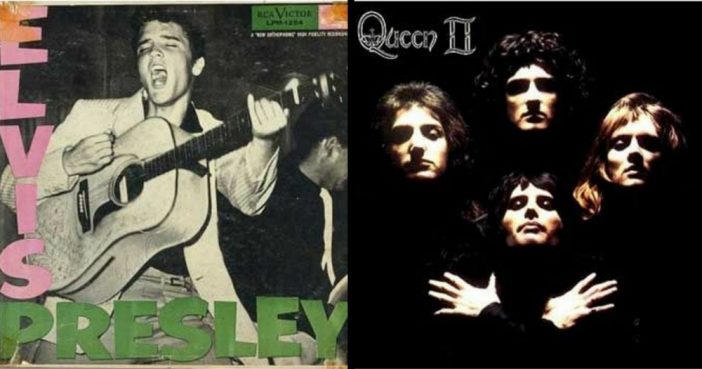 The rise of digital music threatens one of the greatest canvasses of art seen in the 20th Century – the record sleeve. Originally just a protective cover for the fragile crackly goods beneath, it soon evolved into a space for artistic expression in its own right, very often becoming as important as the music itself. Sometimes, even more so: legend has it that the cover of New Order’s Blue Monday was so expensive to make that their label lost money on every copy sold.

20. Abbey Road by The Beatles Quite simply, an utterly iconic image, with the Fab Four themselves at their coolest: John resplendent in a white suit, Paul barefoot. Perfectly in harmony, and utterly British. The crossing itself was given Grade II listed status in 2010 – there aren’t many traffic artifacts that can boast that.

19. American IV: The Man Comes Around by Johnny Cash All five of the covers for Johnny Cash’s last era of recordings, the American series are fantastic, with the big, simple typeface utilising the strength of the legend’s name. However, the coolest is for IV: The Man Comes Around, as it juxtaposes that strength with the visible weakness of the Man In Black himself: nearing death and reflecting on his life he looks downward and prepares to fade to black himself.

What album cover is next on our countdown? I’ll give you a clue- it’s about an animal coming out of a place…

Page Page 1 of 11
Previous article: Guess What? You Can Rent Playboy Studios!
Next Post: Which Golden Girl Are You?