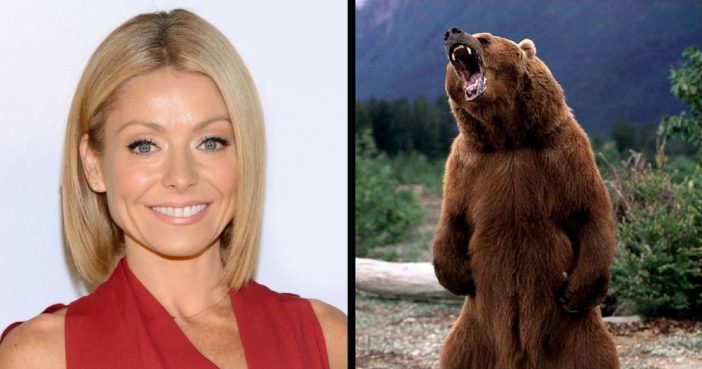 Beware, bears—Kelly Ripa is in town.

As the LIVE co-host recalled to Seth Meyers during an appearance on Late Night Tuesday, she and her husband Mark Consuelos were on a camp trip with their three children when they came face to face with a large, furry friend…or foe.

From the moment they touched down, Ripa had a feeling they were a touch out of their element. “We took the kids camping at a place on Vancouver Island where the first thing you do is you arrive by seaplane,” she told Meyers. Because Consuelos had mentioned there would be a jacuzzi, Ripa packed two pairs of shorts, a bikini—and a ballgown. You know, just in case!

“I’m going to the wilderness in snow-capped mountains with two bikinis and a pair of shorts,” she quipped. Upon landing, the camp’s workers asked if the family had any food on them. “I am a mom of three kids. I have a seven-course dinner in my backpack,” Ripa retorted.

So, they were asked to hand all of their goodies over and were told they would get the food back upon check-out. When Ripa asked why this was the case, she was told it would prevent the bears from coming into their tent. When the star showed her surprise, the guides told her, “You’re in the Ursus Mountains. ‘Ursus’ means bears.”So when and where did they encounter this bear? Click “Next to find out.

Page Page 1 of 3
Previous article: Did this Happen in 1977?
Next Post: 21 Recognizable People Who Might Make Good Presidents