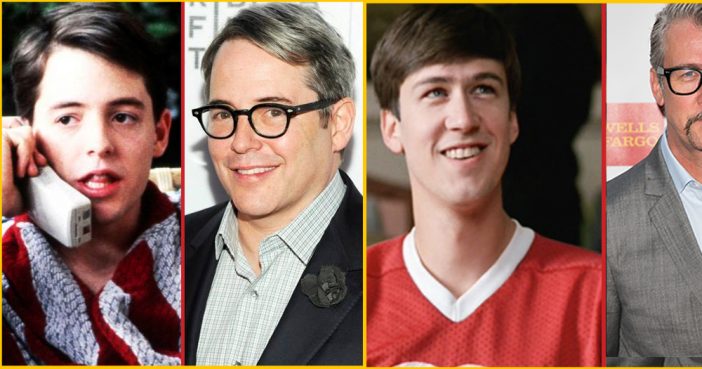 As hard as it is to believe, John Hughes’ high school classic Ferris Bueller’s Day Off premiered in the UK on this day 30 years ago. (America got it eight months earlier. Eight months.)

Best known as Mr Sarah Jessica Parker these days, Broderick starred in The Cable Guy, Godzilla, Inspector Gadget and The Stepford Wives remake, as well as voicing adult Simba in a little Disney animation called The Lion King. He showed up on TV in Frasier, Modern Family and 30 Rock too.

Broderick’s screen work has cooled in more recent years, though he continues to work in the theatre and holds the record as the youngest winner of the Tony Award for Best Featured Actor in a Play. He also played himself in Trainwreck.

Ruck was already almost 30 by the time he played Ferris’s nervous best buddy Cameron, and has admitted to going through a period where he wished he’d never appeared in the film.

He’s had some odd film roles in the intervening years, including Star Trek: Generations, Speed, Twister and M Night Shyamalan’s infamous The Happening. He has a long list of TV guest spots, from Stargate Atlantis and Fringe to Scrubs and, recently, The Middle, but most noticeably featured in all six seasons of Spin City.

The Legend star played Ferris’s girlfriend Sloane in the 1986 movie. She’s had a few acting jobs since, with a notable appearance in Timecop and paving the way for Margot Robbie as Harley Quinn in the extremely short-lived 2002 Birds of Prey series.

Sara apparently claims to have ‘retired’ from acting, which must have freed up some time for her to make use of her private pilot’s license. She was married to Sean Connery’s son Jason from 1996-2002 and is now married to Jim Henson’s oldest son Brian.

Click NEXT to see what Ferris’ sister is up to…

Page Page 1 of 3
Previous article: 212 years ago today, The Burr vs. Hamilton duel happened
Next Post: Controversy Over Amelia Earhart Photo: Real Or Not?