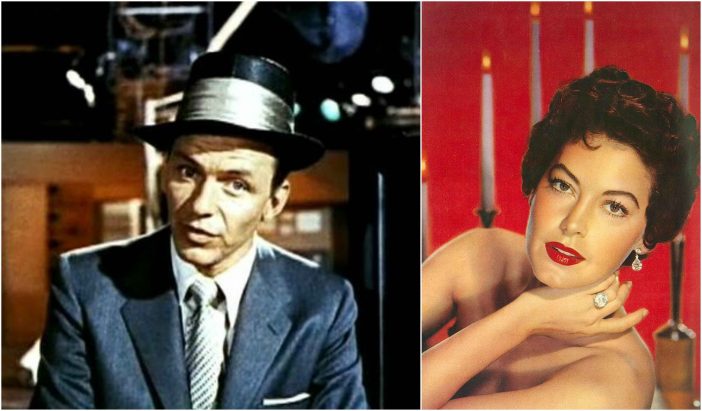 Some Hollywood romances lead to marriage. Such unions might not last, but in certain marriages the love never dies. Such was the case with Frank Sinatra and Ava Gardner.

When Sinatra, already a famous crooner, first spotted the gorgeous Gardner, it was in a magazine photograph. He declared to a friend,  “I’m gonna marry that girl one day.” One obstacle: Frank was married to his first wife, Nancy Sinatra, the mother of his three children.

When Sinatra found himself in Gardner’s presence, at a friend’s party, he was completely infatuated.  She wasn’t. Gardner had already met him at MGM studios and wasn’t impressed, considering him “too arrogant, overpowering and conceited.” During that time, Gardner was unhappily married to Artie Shaw, who she said was “an aggressive eradicator of her self-esteem.”

Sinatra’s and Gardner’s paths crossed again on February 10, 1949, when Gardner, who was headed for MGM’s silver anniversary party in her green Cadillac, drove past Sinatra. When she pulled alongside, a grinning Frank raised his hat, catching Gardner’s attention. She later recalled: “He was so handsome, with his thin, boyish face, bright blue eyes and ­incredible grin. And he was so ­enthusiastic and invigorated, clearly pleased with life, in general, himself, in particular, and, at that moment, me.”

Soon after, he asked her out, and this time she didn’t think twice. They went for a late-night drunken drive from Palm Springs to Indio and shot out streetlights and store windows with .38 pistols as they went by.

That first date set the tone for their relationship, one of  intense passion, quarrels, and alcohol. Sinatra was sure it was love and so he wasted no time announcing to Nancy that he was leaving her and their family for another woman. The divorce papers were quickly signed, and in 1951, the church bells rang for Gardner and Sinatra.