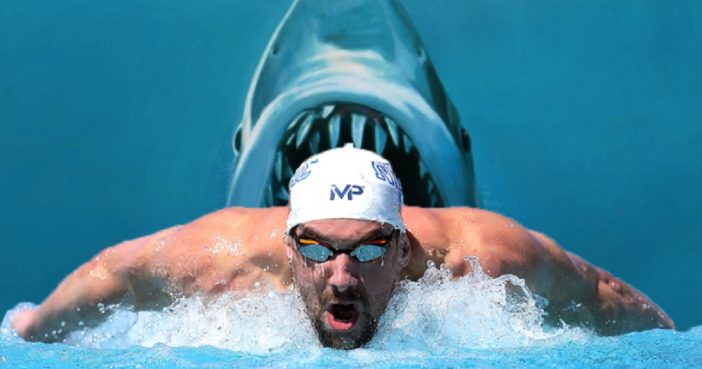 It’s not clear exactly how Phelps, who turns 32 later this month, will be racing the great white. For instance, will it be a freestyle race, or maybe butterfly stroke? In any event, here’s hoping there’s more separating Phelps from his foe than just some floating lane markers.

Phelps recently provided a possible preview of what to expect, when he posted a photo showing a great white passing ominously by a diving cage. “I was able to do something that I had always wanted to do,” Phelps said.

If that weren’t enough excitement, Phelps will also learn “how to stay calm when a hammerhead swims two feet above his face,” according to Discovery. That’s part of an educational excursion with the Bimini Shark Lab, whose staffers “dispel the myths and common misconceptions” about the predatory fish, which apparently didn’t include all the ways that racing them tends to be a losing proposition.Of course, Phelps-related programming makes up just a small portion of “Shark Week.” Here are some titles to which viewers have to look forward:

Sounds like some folks will be glued to their screens like so many remoras. As for Phelps, best of luck snatching victory from the Jaws of defeat!

RELATED:
Jaws: The Shark That Changed Hollywood
Inside A Museum’s Specimen Room – It’s Not For The Squeamish!
Fascinating Facts About “E.T. The Extra-Terrestrial” On It’s 35th Anniversary
Pages: Page 1 Page 2