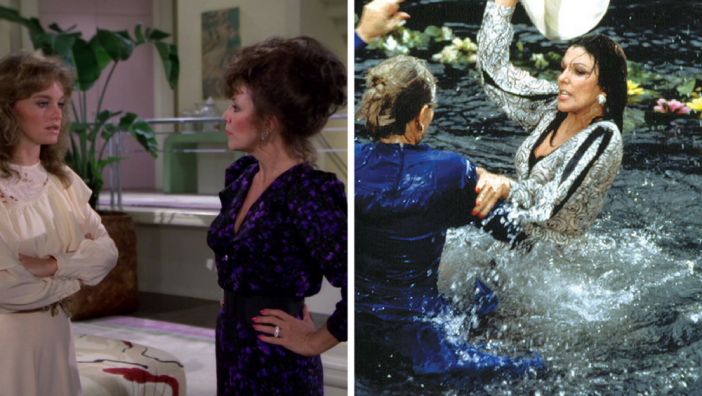 Alexis Colby’s maiden name was Morell. She is also formerly a Carrington. After her divorce with Blake Carrington, her last name changes to its final forms,  Dexter and then Rowan. Alexis is a fictional character played by Joan Collins on the famous American TV series Dynasty. She is elegantly evil ex-wife of Blake Carrington (John Forsythe),  who makes it her own job to make Blake and his family’s lives a living hell. The role was originated by Joan Collins in the very first episode of the show’s second season starting in 1981. The character appears very briefly in the first season’s finale, not speaking and with her face unseen in the famous courtroom scene cliffhanger.). Joan Collins stayed as an integral part of the show until its finale in 1989. She would later return as Alexis for the 1991 miniseries, Dynasty: The Reunion.  Alexis is always plotting to destroy her ex-husband Blake’s life. Passionate yet vengeful, Alexis loves her children so much and will do anything to protect them, but she has a tendency of ignoring their own needs and desires as opposed to what she thinks is best for them. The show is known for Alex and Blake’s new wife Linda’s infamous catfights. Enjoy this video compilation of the two in their most well known and outrageous fights! Happy Birthday Joan Collins!

Previous article: How Well Do You Know Happy Days?
Next Post: MisMatch- The Barefoot Executive