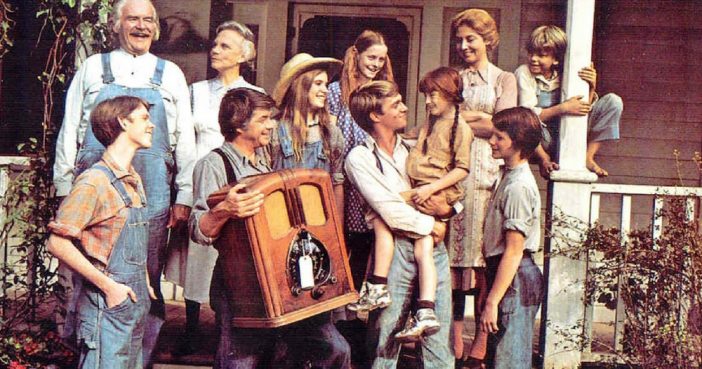 In the Blue Ridge Mountains of Virginia, during the Great Depression, the Walton family makes its small income from its saw mill on Walton’s Mountain. The story is told through the eyes of John Boy, who wants to be a novelist, goes to college, and eventually fulfills his dream. The saga follows the family through economic depression, World War II, and through growing up, school, courtship, marriage, employment, birth, aging, illness and death. Here are 22-ish facts about one of our favorite tv families, The Waltons:

1. The basis for the Walton family was series creator Earl Hamner Jr.’s real life family members. Hamner grew up with 7 other siblings each of whom served as the basis for each young Walton character. He also based the characters of The Waltons’ grandparents on composites of both sides of his Grandfathers and Grandmothers, his mother’s mother, his mother’s father, his father’s mother and his father’s father.

2. The “goodnight” routine at the end of each show was an actual activity in creator Earl Hamner, Jr.’s home when he was a child. He said the activity would go on until his father finally told them to be quiet.

4. “The train bearing the body of Franklin Delano Roosevelt moved slowly from Warm Springs, Georgia toward the nation’s capital. Where ever it went, the people who loved him gathered to mark its passing, remembering the man who led the nation out of its most crippling depression and toward victory in its greatest war. Planting seeds of brotherhood along the way…when it passed through Charlottesville my family was there to pay their last respects ” – Earl Hamner Jr.

5. The “Walton House” was located in the northern section of the Jungle area of Warner Bros. Studios’ lot and Walton’s Mountain, which could be seen from the house’s front porch, was actually a slope of the Hollywood Hills.

7. The same house (exterior) was used as the old “Dragonfly Inn”, purchased and renovated by Lorelai and Sookie in “Gilmore Girls”

8. In the series’ first episode, after their debut movie, The Waltons: The Foundling (1972), the family gathers around their new radio to listen to the Edgar Bergen and Charlie McCarthy Show.

This was a nod to Bergen, who played the original Grandpa in the series’ pilot movie, The Waltons: The Homecoming: A Christmas Story (1971).

9. When the show premiered on CBS at the beginning of the 1972-73 season, most media pundits felt it didn’t have a chance, airing as it did opposite two longtime rating powerhouses, Flip (1970) on NBC, had been the number 2 show in America for the previous two seasons, and ABC’s Mod Squad (1968) was a long-standing favorite, as well.

10. “The Waltons” out-performed both shows in the ratings by a wide margin. “Mod Squad” was canceled by the end of the season, and Flip Wilson, rather than have the same thing happen to his show, announced that the 1973-74 season would be his last.

“If the good Lord intended people to smoke, he would’ve put a chimney on the top of their head”

12. Ironically, in real life, Grandma Walton was a chain-smoker. No doubt, she had a cigarette in hand immediately upon finishing the scene!