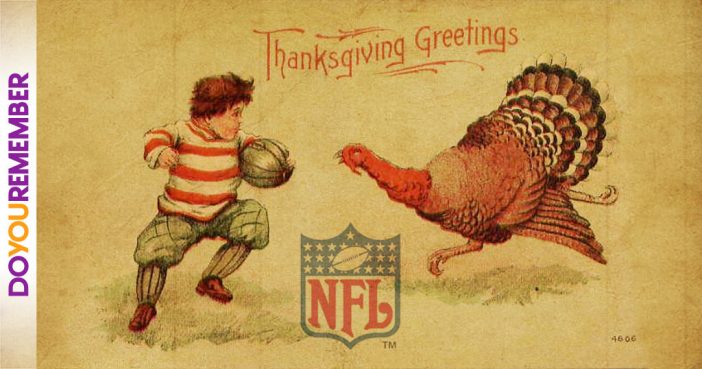 For as long as most of us can remember, Thanksgiving has been about two things in nearly all American households: turkey and football. Each is considered an integral part of the occasion, and while the big feathered creature’s place has long been cemented as the centerpiece of the day’s feast, some have wondered how the pigskin found itself included in the festivities. The idea of playing American football games on Thanksgiving Day dates back to 1876, with Ivy League rivals Yale and Princeton being the first to square off. A few other college programs eventually followed suit, but it would be years before any pro football teams would play on that day. In 1902, the Major League Baseball-backed National Football League (no relation to today’s NFL) held their championship game over Thanksgiving weekend, and in 1905 the Latrobe Athletic Association battled the Canton Bulldogs on Thanksgiving. These games provided entertainment, but the matchups weren’t sustainable due to a lack of player availability (most of them had regular jobs).

Fast-forward to November 1934, when Detroit Lions owner George A. Richards was looking for a way for his team to steal some of the thunder from the Tigers, who had won the American League Pennant earlier that year. He soon came up with the idea of playing a game on Thanksgiving, and used his influence as owner of radio station WJR, which at the time was one of the biggest in the country, to get NBC to broadcast the game on its 94 affiliates. The opponent would be the undefeated, defending NFL champion Chicago Bears, and the stakes were high; with the Lions having only one loss, the victor would win the NFL West. Twenty-six-thousand fans flocked to the University of Detroit Stadium for the sold-out contest, with several thousand more turned away at the gate. The Bears ultimately won the game 19-16, but the tradition established by Richards and the Lions on that day proved to be a much bigger victory for Detroit. They immediately became a sure bet to play on Thanksgiving each year, and battled the Bears regularly on that day until 1938.

The Chicago Cardinals, Green Bay Packers, Frankford Yellow Jackets, Buffalo All-Americans, Canton Bulldogs, New York Giants and Pottsville Maroons also played games on Thanksgiving Day during this time, although World War II halted the tradition. When play resumed on Thanksgiving in 1945, the Detroit Lions were the only team guaranteed a game on that day. As for the Dallas Cowboys, their first Thanksgiving Day game was played in 1966 after Cowboys general manager Tex Schramm, who was the mastermind behind the legendary Dallas Cowboy Cheerleaders, lobbied heavily to have the team appear on that day. He saw it as a great public-relations move for the franchise, which at the time was struggling under their young coach, Tom Landry. While the NFL had some fears that fans in Texas might not show up in great numbers, they couldn’t have been more wrong, as a record-breaking crowd of 80,259 attended the game, which was held at the Cotton Bowl. The home team didn’t disappoint either, beating the Cleveland Browns 26-14 and beginning their own tradition of hosting NFL games on Thanksgiving Day. In 2006, the NFL, undoubtedly in an effort to squeeze a few more millions of dollars in advertising revenue from major brands, decided to add a third game to the schedule, though the teams involved would be randomly selected. That year the Kansas City Chiefs topped the Denver Broncos 19-10.

Start next Thanksgiving off right