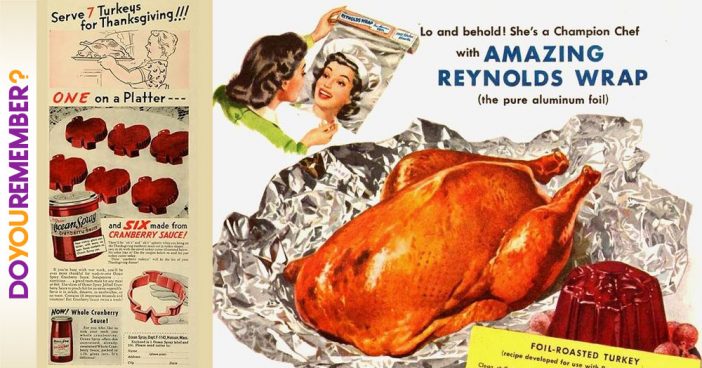 We’re sure that when the pilgrims and Native Americans broke bread in the 17th century, neither showed concern for whether the cornucopia was sourced locally or if the turkey was frozen or fresh. But sometime in the last hundred years, Thanksgiving became more about what we eat and how it’s prepared than a day to give thanks. Call it a sign of the times or chalk it up to our general obsession with big-name brands, but Butterball turkeys, Pillsbury biscuits, Ocean Spray cranberries and Reynolds aluminum foil are the new hallmarks of the holiday. If you’re starting to feel like maybe you don’t have a handle on your upcoming Thanksgiving dinner, we present a rundown of companies you should make room for at the table this year.

Sure, we’ve all heard of the unfortunate turkey shortage facing America this Thanksgiving, leaving many of us with no choice but to opt for a frozen bird this year. Normally, anything from the frozen-food aisle would be blasphemous to serve on Thanksgiving, unless of course it’s from America’s favorite poultry brand. The company was started by Ada Walker in 1940 in Wyoming, Ohio. The next owner, Leo Peters, sold the name “Butterball” to Swift and Co., which would come under ConAgra ownership in 1990. The company did not become the largest turkey producer in the country (approximately one billion each year) until 2006, when it transferred ownership to Carolina Turkeys. But what really made Butterball synonymous with Thanksgiving was the launch of the Turkey Talk-Line, a telephone hotline that helps customers with cooking and prep issues. It began in 1981 with more than 11,000 callers and has grown to approximately 200,000 callers each holiday season. Happily, each of the operators holds a degree in either dietetics or home economics. What’s the most frequently asked question? The problem plaguing procrastinating chefs everywhere: the time it takes a turkey to defrost, of course.

According to a recent study performed by Pillsbury, 62 percent of families will pass a breadbasket around the Thanksgiving table. Sure, these stats are slightly skewed considering the source, but the fact remains that bread is still a staple of most, if not all, Thanksgiving menus. And Pillsbury products—refrigerated cookies, crescent dinner rolls, biscuits, pie crusts—have simplified holiday cooking for more than 130 years now.  Founded in 1872 by Charles Alfred Pillsbury and his uncle John S. Pillsbury, the company was the first in the United States to use steel rollers for processing grains. Pillsbury was purchased by a British company in 1889 but returned to original ownership as the Pillsbury-Washburn Flour Mills Company in 1935. The company introduced prepackaged dough into its lineup, quickly transforming into the Pillsbury America has come to recognize. Today, the company features a prominent Thanksgiving section on their website, with holiday recipes and time-saving tips that reflect the current trend for faster, semi-homemade dishes.

Here is a product that’s just as much about the next day’s leftovers as it is about the main event. Reynolds Metal Company was founded in 1919, but didn’t begin producing aluminum foil until 1926, when it introduced heat-sealed bags for food, foil wrappers for cigarettes and candy, and aluminum labels for bottles, among other products. Nowadays, we use Reynolds products for more than just covering the turkey or packaging leftovers: Crockpot liners make for easier clean-up, parchment paper creates crispier cookies, and aluminum trays offer a Thanksgiving meal that takes longer to eat than it does to clean up.

This will make the hipsters happy. The 83-year-old company is an agricultural cooperative with nearly 700 member growers in the Northeastern and Northwestern regions of the United States. Though most equate Ocean Spray with cranberry juice, grower Marcus L. Urann led the company’s creation in 1930 following the development of cranberry sauce. Cranberry juice drinks followed, as did cranapple and grapefruit. As the world’s largest cranberry grower, Ocean Spray has expanded to dried varieties, energy drinks and sauces—a Thanksgiving staple.