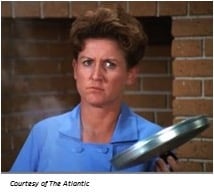 One of my favorite things to do before I go to sleep is watch classic TV sitcoms. There is nothing quite as relaxing as getting into your PJs, curling up in bed, and watching shows from the past. Well, usually its relaxing, but a few nights ago as I was watching a rerun of The Brady Bunch, a troubling thought crept into my head – I found myself wondering how much did Alice, the housekeeper, get paid? According to the US Department of Labor, the minimum wage was $1.60 in 1969, the year The Brady Bunch premiered. So, for the sake of this article, let’s just say that Alice got minimum wage plus room and board. It doesn’t sound so bad when you consider she was living in a nice house and only had Mike Brady and his three boys. But what happened when Mr. Brady met a lovely lady who was bringing up three very lovely girls and they formed a family? Did Alice get paid more after they got married and moved into Mike’s house? After all, she was now cooking meals for eight people, her laundry basket at least doubled, and now had to clean and maintain a house where a “bunch” of other people lived. Reflecting on the episodes, she did a considerable amount of work having to help look after three more kids. She literally had twice as much work! On the plus side, she regularly vacationed with them, like their trips to the Grand Canyon and Hawaii, and I assume that all expenses were paid for her. But on the other hand, during those episodes, she never really got time to herself, and continued to serve the Bradys. And to make matters worse, later in the series, when cousin Oliver came to live with the Bradys. Not only was there another mouth to feed and still more work, it was additionally unfair because, as we all know, cousin Oliver was a bit of a jinx and probably caused a lot of accidents around the house. I think if anyone should have benefited when the minimum wage was raise to $2.10 in 1974, the year The Brady Bunch ended, it was Alice. But I really don’t think it was enough, especially running up and down those long stairs.

If they didn’t increase Alice’s salary, she could have been consoled by Mr. French, the butler from Family Affair. Mr. French had any easy gig when he was first hired by his boss, Bill Davis. Mr. Davis was a highly successful engineer who traveled a lot. Mr. French got paid to live in a very nice, roomy apartment alone a good deal of the time (I wondered why he need the room and a “gentleman’s gentleman,” but that’s another story). He didn’t have much to do. Mr. French could have gone days without cleaning. Probably the only time he cleaned while Mr. Davis was away was the day before Mr. Davis came home. Who would ever know? So, the fact that he may also have only gotten minimum wage plus room and board wasn’t bad at all. But like with Alice, I can’t help but wonder if he asked for more money when the kids moved in. He is probably the only TV domestic who deserved more money than Alice because when he was first hired, childcare was not one of his duties. Mr. French was only hired to cook, clean and look after the apartment when Bill Davis was gone. Suddenly, his world was turned upside down and had to take care of three children (including a teenager), sometimes as the only adult. Thankfully, he could always turn to reading Winnie the Pooh to mollify the twins (by the way – Mr. French moonlighted as the silly old bear).

As I sat there wondering whether Alice and Mr. French got paid extra when their employment duties increased and the cost of living went up, I thought about how much joy raising those kids and being part of a family meant to both Alice and Mr. French. Maybe, that plus, however much (or little) they got paid before they had extra responsibilities, was enough. After all, before Mike Brady married Carol, Alice was living in a house of only men. With the addition of Carol and the girls, Alice got the bonus of having females with whom she could talk to and relate to. Similarly, Mr. French had a pretty sweet job before Sissy, Jody and Buffy, but he was probably lonely and bored in that big apartment by himself. Having those kids must have kept him both busy and entertained. So I guess at the end of the day, even if they didn’t get paid much, Alice’s and Mr. French’s jobs came with benefits money couldn’t buy. French benefits?