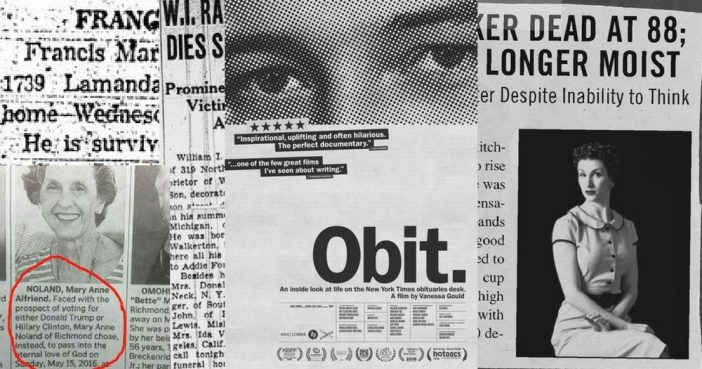 Has there ever been a moment in your daily breakfast routine where you’re browsing through the newspaper only to haphazardly land upon the obituary section, suddenly wondering if you knew someone who passed and/or curious to read about the history of one’s life? I know a lot of people who make the obituary one of their first reads, daily. This is solely for the joy of taking a trip down memory lane; like a voyage into peoples lives and what they did to make an influential, impact on the world. Like reading a stranger’s biography. As eerie as it may sound, it is actually truly fascinating. So much so, that director Vanessa Gould decided to make a documentary about it.

The story began back in 2012 when The New York Public Library contributed its name to a panel discussion entitled,  “Dead From the NYPL: The Perverse Pleasures of Obituaries.” Ostensibly, this drew an overwhelmingly huge crowd. In this crowd of attendees sat an obituary writer who works at The New York Times. The writer would later conclude that working on obituaries was as a matter of fact, a “glamorous occupation with an enthusiastic fan base.””

Not long after this, Vanessa Gould, a practicing documentarian would appear at the doors of The New York Times’ Midtown Manhattan to begin production on the newspaper’s obituary division. The film, which is titled with a chic abbreviated “OBIT,” is now open in limited release in select theaters.

According to New York Times Obit Writers Bruce Weber and Margalit Fox, “Death Is Never Solicitous Of A Deadline.” The two have written millenaries of obituaries for thousands of people across the globe, varying from government officials all the way to the inventor of Etch-a-Sketch. These two discuss the emotively-mixed profession in the new documentary, Obit. According to an interview with the featured authors, when asked if they agree with the popular critique of their jobs subsisting as “sad or morbid,” Fox instantly jumped in to reply, “Not in the least. It may be a little bit contrary to popular belief, but in point of fact, in a news obituary of 800 or a thousand words, there might be one or two sentences about the death and the other 98 percent of this remarkable narrative is every inch about the life.” This furthermore pushes the envelope behind the true joys of writing about death.

Hear the full NPR interview below:

After viewing the film for my own enthusiasm, I now may never think of death the same way or rather, will never look at the reporters who write about death in the same light. What one would typically consider a “morbid” or a simply “sad” job, is depicted in OBIT as a rather, pleasant and intriguing occupation. The documentary takes a dark and solemn subject and shines it in a cheerful and a didactic light. Somehow, these journalists have managed to tribute notable deaths in a remarkable fashion, giving viewers and readers a whole new dimension into their careers.

OBIT has given us a rare glimpse into the lives of people who have passed through the diligent and resourceful journalists who write about them. Thanks to their “die” hard dedication (no pun intended), they memorialize the passing of people, teach us a bit of history and we sit in complete awe as we learn about these people through the belletristic odes they write about the dearly departed. They take us through a journey of where their lives began to where their next journey will be..

Previous article: Our Favorite Sitcom Staff: Equal Pay?
Next Post: May The Fourth Be With You! Star Wars: Secrets From Beyond The Sith!