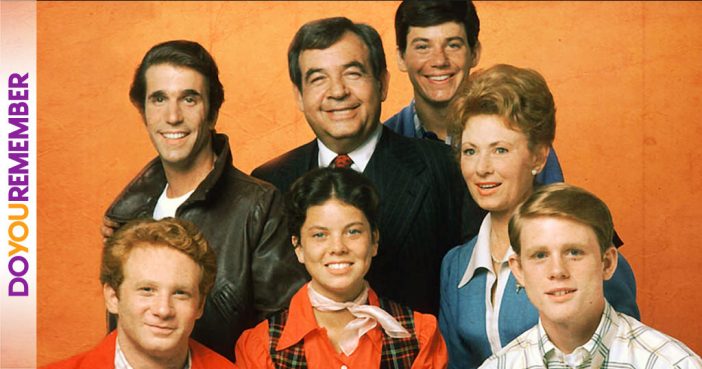 The mid ’70s, with all of its disco and nightlife, was no place for nice, suburban teens to come of age—as evidenced by the flood of ’50s-themed films and television shows that went mainstream during the decade. Perhaps the longest-running example of America’s fascination with wholesome programming is Happy Days, which first aired on this day in 1974. Created by Garry Marshall, the sitcom idealized life in Milwaukee, Wisconsin, and starred Ron Howard as Richie Cunningham and Henry Winkler as the Fonz. The show became an instant hit, and ran for more than a decade. Today, DYR digs up some little-known trivia about the show.

While the show ran for 11 seasons and 255 episodes (1974 to 1984), executives at Paramount and ABC thought the show would be taken off the air after 13 weeks and made no initial plans to budget for a longer season. ABC hoped to land Robby Benson for the role of Richie Cunningham. However, Happy Days creator Garry Marshall wanted Ron Howard for the role and Benson wasn’t particularly interested in doing television. The solution was simple: Get Benson to purposely tank his screen test, which he did, clearing the way for Howard to win the part. The plan went smoothly and, judging by this Reese’s commercial featuring Benson, fortuitously.

Happy Days was so popular that ABC turned it into a Saturday morning cartoon titled The Fonz and the Happy Days Gang. It aired from November 1980 to November 1981.

Fonzie’s trademark leather jacket and boots were almost nixed by network executives, who thought it made him look too much like a hoodlum. They wanted him to wear a windbreaker and penny loafers, but Garry Marshall convinced them to try it his way. They agreed, but only allowed the attire in shots that featured Fonzie’s motorcycle, which explains the bike’s placement in numerous scenes.

In addition to playing the role of Potsie, actor Anson Williams was also an aspiring singer. He got his big break when his character sang “Deeply” during the episode entitled “Graduation.” The single fared well with audiences and was released on Chelsea Records in 1977.

Before he became an “American treasure,” Academy Award winner Tom Hanks played Fonzie’s martial arts rival. Can you guess who came out victorious?