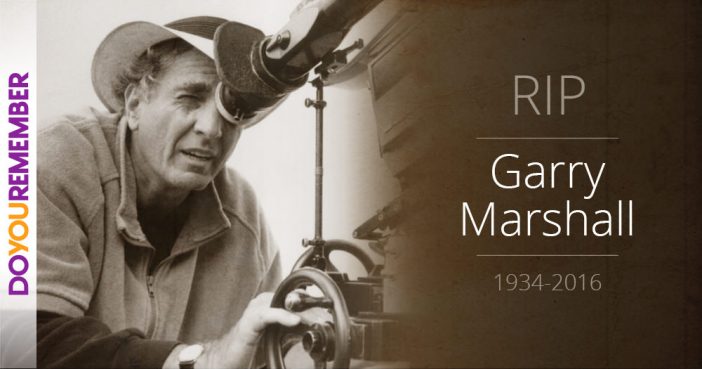 Marshall, who created some of the most popular 1970’s TV shows — including “Mork and Mindy” and “Happy Days,” and directed hit films like “Pretty Woman” and “The Princess Diaries” — died Tuesday in a Burbank hospital, dude to complications of pneumonia following a stroke at a hospital his publicist Michelle Bega confirmed.

Marshall was born in The Bronx, New York, and graduated from Northwestern University. He is survived by his wife of 53 years, nurse Barbara Sue Marshall, and leaves behind his two sisters, three children, and six grandchildren.

“He loved telling stories, making people laugh, and playing softball, winning numerous championships. Even at age 81, he had a record this year of 6 – 1 pitching for his team,” Bega said.

The Hollywood legend directed, produced and starred in films and TV shows since the late 1950’s.

In 1970, Marshall created a television adaptation of Neil Simon’s play “The Odd Couple” for ABC. The successful sit-com drew several Emmy nominations over the course of its five seasons. Television hits followed soon after. “Happy Days” became the number one rated television show in 1977 and launched an American cultural icon: the Fonz.

Several stars posted tributes to the famed director and producer on social media, thanking him for his many contributions to their craft.

RIP #GarryMarshall whose humor & humanity inspired. He was a world class boss & mentor whose creativity and leadership meant a ton to me.

I lost a friend & mentor. We lost a beautiful man & masterful story teller. Gary Marshall I love you. I hope I get to go where you are.

I will never forget he called me and said “this is Gary Marshall from show business ” I saved that message for years. We lost an icon

RIP Garry Marshall. You forever changed my father’s life, and thus, mine. Thank you for capturing so much joy on film, over and over.

Garry Marshall gave me one of the best experiences I ever had in my career. Thanks pal. RIP

Garry Marshall hired me at 15 years old. He gave my wife her start at 18, as a makeup artist. He changed our lives. And MANY others. #love

The world has lost a great man, a comedy icon and a wonderful friend.
Rest in peace Garry Marshall.

Oh man, this is a tough one. Honored I spent time with this kind man. My love to his wife and family. #garrymarshallpic.twitter.com/COetJYtqMz

I was blessed to have worked with Garry Marshall. Not only was he a wonderful director, but also, he was a gentle, loving, kind man. #RIP

Rest in peace dear sweet Garry Marshall. Thanks for being a mentor and friend to so many people. ???pic.twitter.com/BxWZyODogY

Garry Marshall I adored working with you, your kindness unforgotten. “May you be in heaven half an hour before the Devil knows you’re dead.”

RIP #GarryMarshall What a kind-hearted, funny, creative man. Loved working with him…loved even just standing next to him. You are missed.

Remembering Garry Marshall ..a national treasure , thanks for all the great entertainment ? God speed …R.I.P#GarryMarshall #oneofakind

Garry Marshall, I am forever indebted to you. Thank you for taking a chance on me. I love you. On the wings on Angels, rest now.

Garry Marshall was as sweet as he was generous and he told a great story. He will be missed.

I only met Garry Marshall once, when I was very young, but he was incredibly warm, encouraging, and generous with his time and energy. ?

RIP Garry Marshall. Had the privilege of working with this legend on “Father of the Pride”. He will be missed. Condolences to friends/family

We lost one of the all time greatest tonight. My dear friend, Garry Marshall, has passed away. My deepest thoughts to Barbara & the family.

Director #GarryMarshall died. Amazing career. I met him back in April and got to tell him Nothing in Common was one of my favorite movies.

We lost one of the greats today. A legend whom I was grateful to know. RIP #GarryMarshall. Thank you for for all the happy days you gave us.

Sad & devastated… Another legend. My liege … We almost had it. Thank you for EVERYTHING you gave us.

So sad to hear about Garry Marshall.He was always kind and encouraging and told me not to sweat the small stuff(flops)all love to his family

I met Garry Marshall backstage last month at The Little Mermaid concert. I was just amazed and in awe of him. He was so lovely, so talented.

#GarryMarshall was one of the good ones! He always fought for what is right! He helped change this world in many ways. ❤️❤️❤️

I was a young skater kid in NYC with nothing, #GarryMarshall exited an event and just handed me his gift bag full of goodies. LOVE HIM. RIP

If you never met Garry Marshall, I’m sorry. We was a joy to be around. He shaped my childhood and by surprise — my adulthood.