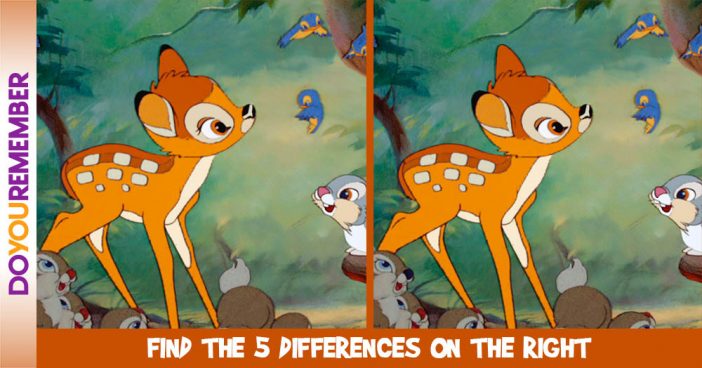 2. The Points in Bambi’s Ears are No Longer Black

4. The Bunny on the Bottom Right No Longer has a Face

5. Thumper is Missing a Tooth

A 1942 American animated drama film directed by David Hand (supervising a team of sequence directors), produced by Walt Disney and based on the book Bambi, A Life in the Woods by Austrian author Felix Salten.

The film was released by RKO Radio Pictures on August 13, 1942, and is the fifth film in the Walt Disney Animated Classics series. The main characters are Bambi, a white-tailed deer, his parents (the Great Prince of the forest and his unnamed mother), his friends Thumper (a pink-nosed rabbit), and Flower (a skunk), and his childhood friend and future mate, Faline.

For the movie, Disney took the liberty of changing Bambi’s species into a white-tailed deer from his original species of roe deer, since roe deer are not native to North America, and the white-tailed deer is more widespread in the United States.

The film received three Academy Award nominations: Best Sound (Sam Slyfield), Best Song (for “Love Is a Song” sung by Donald Novis) and Original Music Score. In June 2008, the American Film Institute presented a list of its “10 Top 10″—the best ten films in each of ten classic American film genres—after polling over 1,500 people from the creative community. Bambi placed third in animation. In December 2011, the film was added to the National Film Registry of the Library of Congress.

Look Back at the Disney Classic’s Original Trailer

A doe gives birth to a fawn named Bambi, who will one day take over the position of Great Prince of the Forest, a title currently held by Bambi’s father, who guards the woodland creatures from the dangers of hunters.

The fawn is quickly befriended by an eager, energetic rabbit named Thumper, who helps to teach him to walk and speak. Bambi grows up very attached to his mother, with whom he spends most of his time.

He soon makes other friends, including a young skunk named Flower and a female fawn named Faline. Curious and inquisitive, Bambi frequently asks about the world around him and is cautioned about the dangers of life as a forest creature by his loving mother.

During Bambi’s first winter, his mother is shot and killed by a deer hunter while trying to help her son find food, leaving the little fawn mournful and alone. Taking pity on his abandoned son, the Great Prince leads Bambi home.

Years later, Bambi has matured into a young stag, and his childhood friends have entered young adulthood as well. They are warned of “twitterpation” by Friend Owl and that they will eventually fall in love, although the trio view the concept of romance with scorn. However, Thumper and Flower soon both encounter their beautiful romantic counterparts and abandon their former thoughts on love.

Bambi himself encounters Faline as a beautiful doe. However, their courtship is quickly interrupted and challenged by a belligerent older stag named Ronno, who attempts to force Faline away from Bambi.

Bambi successfully manages to earn rights to the doe’s affections and defeats Ronno in battle. Bambi is awakened shortly afterward by the smell of smoke, and is warned of a wildfire by his father.

The two flee to safety, although Bambi is separated from Faline in the turmoil and searches for her along the way. He soon finds her cornered by vicious hunting dogs, which he manages to ward off. Bambi, his father, Faline, and the forest animals manage to reach shelter on a riverbank. The following spring, Faline gives birth to twins under Bambi’s watchful eye as the new Great Prince of the Forest.

2. The Points in Bambi’s Ears are No Longer Black

4. The Bunny on the Bottom Right No Longer has a Face

5. Thumper is Missing a Tooth