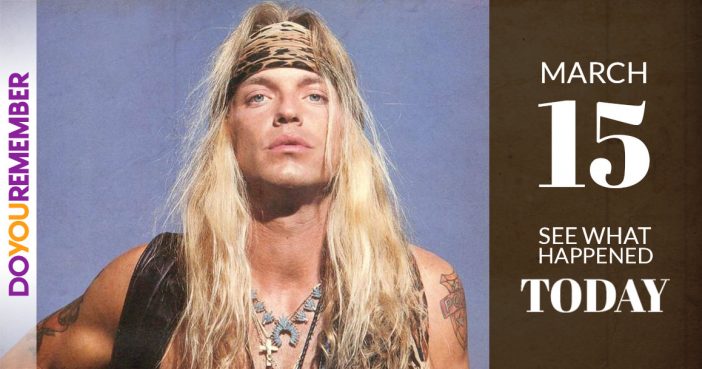 1955 – Ray Charles peaked at No.2 on the US R&B charts with the Atlantic single ‘I Got A Woman’, widely considered the first song to be labelled “soul” – a blending of R&B and gospel.

1965 –  Wayne Fontana & the Mindbenders released the single “Game Of Love”.

1973 – Roberta Flack was at No.1 on the US singles chart with ‘Killing Me Softly With His Song’ and  Elton John had the No.1 album with ‘Don’t Shoot Me I’m Only The Piano Player’.

1975 –  Olivia Newton-John (Have You Never Been Mellow) overtook Bob Dylan (Blood on the Tracks) for the top album.  Led Zeppelin debuted at #3 with Physical Graffiti.

1980 –  The Wall from Pink Floyd remained strong for a ninth week on the Album chart.

1986 –  After 51 weeks, Whitney Houston was at her peak with her self-titled debut album, which spent a second week at #1.  It was just getting started.

1986 –  Starship had their 27th hit (counting their days as Jefferson Airplane and Jefferson Starship) and second consecutive #1 with “Sara.

1986 –  Heart was back in a big way as “These Dreams” reached #1 on the Adult Contemporary chart.

1988 –  Mick Jagger of the Rolling Stones went on his first solo tour, debuting at the Osakajo Castle Hall in Osaka, Japan.  (Note –  many websites report that Jagger went on tour in 1982, but he had no albums nor solo releases that year, and the credible websites report his first tour as being in 1988.)

1989 –  The Rolling Stones signed a contract to play 50 concerts in the United States for $70 million, the largest contract to that point in the Rock Era.

1990 –  13.7 million households signed up to see a pay-per-view special by New Kids on the Block, breaking the record for PPV events.

1998 –  Madonna scored her sixth UK No.1 album with ‘Ray Of Light’, no other female artist had achieved more than three UK No.1 albums.

1965 –  Freddy Cannon appeared on the television show No Time for Sergeants on ABC.

1971 – CBS-TV announces it will cancel The Ed Sullivan Show, then the longest-running TV show in history, after 23 years.

1767 – Andrew Jackson, the seventh United States President, is born in the Waxhaws area near the border between North and South Carolina.

1964 –  Berry Gordy, Jr., the founder of Motown Records, and his wife celebrated the birth of son Kennedy William Gordy, who would later be known as Rockwell (“Somebody’s Watching Me”), in Detroit, Michigan.   1966 –  The Grammy Awards turned eight years old today, and Frank Sinatra won Album of the Year with his great LP September of My Years.

1966 –  “A Taste Of Honey” from Herb Alpert & the Tijuana Brass won the Grammy for Record of the Year. It was originally an instrumental track (or recurring theme) written for the 1960 Broadway version of the 1958 British play A Taste of Honey (which was also made into the film of the same name in 1961). Both the original and a cover by Herb Alpert in 1965 earned the song four Grammy Awards.

1968 – LIFE magazine called Jimi Hendrix “the most spectacular guitarist in the world.”

1969 –  Janis Joplin  was featured on the cover of Rolling Stone magazine, on sale for 35 Cents, (2/6). The magazine was founded in San Francisco in 1967 by Jann Wenner, the first issue of November 9, 1967 was in newspaper format with a lead article on the  Monterey Pop Festival.

1975 – At Disney World, the film Magic Carpet ‘Round the World is shown for the last time at the Circle-Vision 360° Theater. Running since 1974, the film took guests on a tour of landmarks spread across the four corners of the globe.

1980 –  Quincy Jones received a star on the Hollywood Walk of Fame.

1981 –  Eric Clapton had bleeding ulcers and was admitted to United Hospital in St. Paul, Minnesota.

2000 – The audio CD Color, Rhythm and Magic: Favorites From Disney Classics by jazz pianist Earl Rose is released. Tracks include “Go the Distance,” “A Dream Is A Wish Your Heart Makes,” and “Bella Notte.” (Emmy Award winning composer/pianist Earl Rose is one of the most versatile and prolific composers in film and television today.

Previous article: Guess Which Hollywood Royal This Little Girl Is?
Next Post: David Letterman’s Farewell And A Flashback To His Funniest Moments