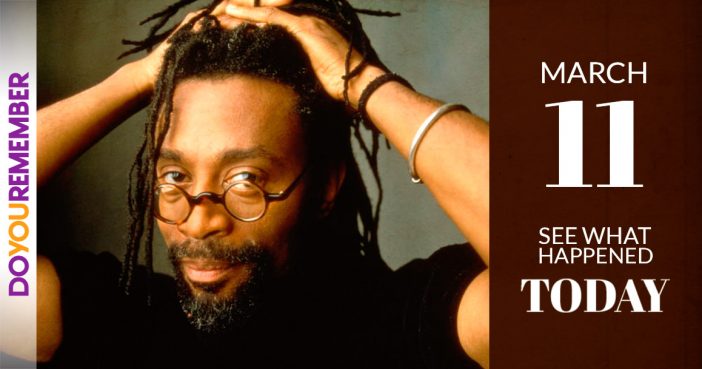 1977 – The Many Adventures of Winnie the Pooh

1994 – The Ref (Hostile Hostages in some countries)

1968 –  Three months after his death in a plane crash, the single “(Sittin’ On) The Dock of the Bay” by Otis Redding was certified Gold.

1970 –  Crosby, Stills and Nash were named Best New Artist at the Grammy Awards.

1970 –  The 5th Dimension won Record of the Year at the Grammy Awards with the classic “Aquarius/Let The Sunshine In”.

1978 –  Kate Bush’s debut single “Wuthering Heights” went to #1 in the U.K., the first of four weeks at the top.  The song was inspired by the Emily Bronte novel and would be covered by Pat Benatar on her excellent Crimes of Passion album.

1978 –  The superstar collaboration of James Taylor, Paul Simon & Art Garfunkel remained at #1 of the Adult chart for the fifth week with their remake of the Hermans Hermits song “(What A) Wonderful World”.

1983 –  “You Are” by Lionel Richie remained at #1 for the third week on the Adult Contemporary chart.

1985 –  Tears for Fears released the single “Everybody Wants To Rule The World”.

1985 –  Wham!  released the single “Everything She Wants” in the United States.

1995 –  II by Boyz II Men moved to #1 on the Album chart, taking over from the Garth Brooks compilation The Hits.

2001 – The Dave Matthews Band had the top album with their solid effort Everyday.

1962 – The NBC-TV series Walt Disney’s Wonderful World of Color airs part 1 of “The Prince and the Pauper.”

1302 – The characters Romeo and Juliet were married this day according to William Shakespeare.

1888 – The “Blizzard of ’88” began along the U.S. Atlantic Seaboard shutting down communication and transportation lines. More than 400 people died.(March 11-14)

1889 – The California legislature divides Los Angeles County and creates  Orange County (the future home of Disneyland) as a separate political  entity. It is named for its most famous product … the orange.

1904 – After 30 years of drilling, the north tunnel under the Hudson River was holed through. The link was between Jersey City, NJ, and New York, NY.

1909 – The first gold medal to a perfect-score bowler was awarded to A.C. Jellison by the American Bowling Congress.

1958 – In the wake of his marriage to 13-year-old Myra Gale Brown, his second cousin, Jerry Lee Lewis is divorced by his present (second) wife, Jane Mitcham.

1964 – The Golden Globe Awards are presented at the Cocoanut Grove, Ambassador Hotel  in Los Angeles, California. Although Hayley Mills is nominated for Best Motion  Picture Actress – Musical/Comedy (for her performance in Disney’s Summer Magic), the award goes to Shirley  MacLaine (for her role in Irma la Douce).

1970 – At tonight’s Grammy Awards in Los Angeles, Blood Sweat and Tears are nominated for a record 11 awards, but only win three categories, including Album (their self-titled debut). Instead, 5th Dimension’s “Aquarius/Let The Sunshine In” wins Record of the Year, and Song of the Year goes to Joe South’s “Games People Play.” Crosby Stills and Nash will beat the Best New Artist jinx by remaining popular even after winning the award.

1974 – Albert Grossman, manager of Janis Joplin, is awarded $122,000 from Joplin’ insurance policy after a court rules that the singer did indeed die accidentally.

1993 – Janet Reno was unanimously confirmed by the U.S. Senate to become the first female attorney general.

1994 –  The Supremes received a star on the Hollywood Walk of Fame.

1997 –  Paul McCartney is made a Knight by Queen Elizabeth II at Buckingham Palace.

1998 – The International Astronomical Union issued an alert that said that a mile-wide asteroid could come very close to, and possibly hit, Earth on Oct. 26, 2028. The next day NASA’s Jet Propulsion Laboratory announced that there was no chance the asteroid would hit Earth.

2001 – The Mulan Parade makes its final trip down Hollywood Blvd at the Disney-MGM Studios in Florida.

Previous article: Things You Need To Know Before Eating Cadbury Creme Eggs
Next Post: I’m In A “Rhinestone Cowboy” Kind Of Mood!