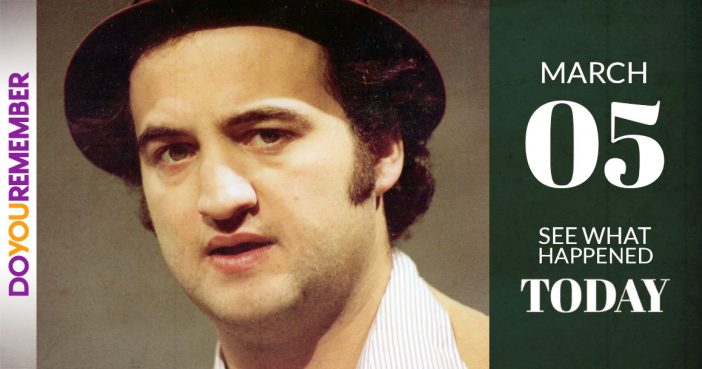 1965 – The Manish Boys, featuring a young David Bowie, released their first single “I Pity The Fool”.

1966 –  “The Ballad of the Green Berets” was the new #1 song, sending Nancy Sinatra backwards with “These Boots Are Made for Walkin'”.

1966 – So hot were Herb Alpert & the Tijuana Brass that they owned the top two albums, and very few in the Rock Era have ever done that.  Going Places took over at #1 from Whipped Cream & Other Delights, which was in its 43rd week.

1973 – Alabama, billed as Wildcountry, makes its debut at The Bowery in Myrtle Beach, South Carolina.

1977 – Glen Campbell enjoyed a fourth week at #1 on the Adult chart with “Southern Nights”.

1977 – Barbra Streisand registered her third career #1 with “Evergreen” as the Eagles surrendered with “New Kid In Town”.

1983 –  “Billie Jean” by Michael Jackson was top dog on the R&B chart for the fourth consecutive week.

1983 – Michael Jackson moved to #1 with “Billie Jean”, just ahead of the great song “Shame On The Moon” by Bob Seger & the Silver Bullet Band.

1984 – Music Directors at radio stations were beginning to see that this was going to be a great year in music.  The Cars released the single “You Might Think”.

1988 – Faith by George Michael remained as the album to beat for the sixth week.  The Soundtrack to “Dirty Dancing” was next with Kick from INXS third.

1994 – Music Box by Mariah Carey returned to #1 on the Album chart for the third time and a seventh total week at #1.

1994 – Celine Dion remained at #1 for the fourth week with “The Power Of Love”.  Ace of Base was patiently waiting with “The Sign” while Salt ‘N’ Pepa and En Vogue combined for #3–“Whatta’ Man”.

1996 – The soundtrack to Disney’s animated Oliver & Company is re-released on Walt Disney Records.

1955 – Elvis Presley makes yet another appearance on the Shreveport radio show Louisiana Hayride, which is this time also carried over the TV airwaves by local station KWKH, making this Presley’s first television appearance.

1962 – The Marvelettes became the first Motown act to appear on The Ed Sullivan Show on CBS-TV.

1963 – Frankie Avalon was a guest on The Jack Benny Program on CBS-TV.

1974 – Smokey Robinson was a guest star on Police Story on NBC-TV.

1983 – Wham! made their television debut in the United States on the ABC-TV show American Bandstand.

1990 – Road to Avonlea makes its debut on the Disney Channel as Avonlea. A television series first broadcast in Canada, it is created by Kevin Sullivan and produced by Sullivan Films in association with CBC and the Disney Channel, with additional funding from Telefilm Canada.

1993 – Touchstone’s newest sitcom Where I Live premieres as part of ABC’s TGIF lineup.

1994 – Wheel of Fortune spends Spring Break at Disney-MGM Studios. The popular game show will tape 20 episodes over the next 4 days.

1923 – Old-age pension laws were enacted in the states of Montana and Nevada.

1933 – U.S. President Franklin D. Roosevelt ordered a four-day bank holiday in order to stop large amounts of money from being withdrawn from banks.

1997 – Chuck Niles received a star on the Hollywood Walk of Fame.

1998 – NASA announced that an orbiting craft had found enough water on the moon to support a human colony and rocket fueling station.

1998 – It was announced that Air Force Lt. Col. Eileen Collins would lead crew of Columbia on a mission to launch a large X-ray telescope. She was the first woman to command a space shuttle mission.

2000 – The second annual Garden Design Event at the Disney Institute in Walt Disney World (offering hands-on experience in all aspects of designing, planting and maintaining a garden) comes to an end after 4 days.