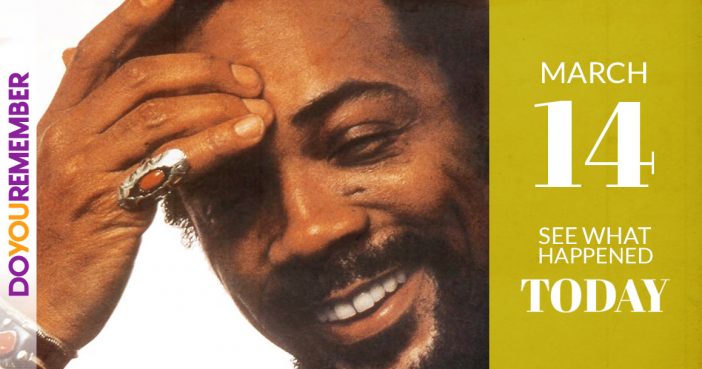 1958 – The Recording Industry of Association of America (RIAA) announced awards for sales.  A single selling a million copies would be awarded a Gold disc, a single selling over two million would get a Platinum record.  A Gold album would signify sales over 500,000 copies and a Platinum album signified album sales over one million.

1958 – The first Gold record was awarded to Perry Como for his single “Catch A Falling Star”.

1960 – Sam Cooke began a tour of the West Indies in Montego Bay, Jamaica.

1964 – The Beatles made history by being the first act in the Rock Era to own the top three songs for a week–they were on top for the seventh straight week with “I Want To Hold Your Hand”, remained second with “She Loves You” and “Please Please Me” moved to #3. No one has ever been able to match that feat, although the Bee Gees came close in 1978.

1969 –  Several great songs released on This Day in Rock Music History*.  Stevie Wonder released the single “My Cherie Amour”.  The song debuted on the Singles chart on May 31, 1969.

1970 – Simon & Garfunkel remained at #1 for the third week with “Bridge Over Troubled Water”.

1981 –  Barbra Streisand & Barry Gibb rose to #1 on the Adult Contemporary chart with their duet–“What Kind Of Fool”.

1992 – Garth Brooks once again ruled the Album chart for a 16th week with Ropin’ the Wind.

1955 – Elvis Presley was interviewed on The Jimmy Dean television show.

1965 – Walt Disney’s Wonderful World of Color airs part one of “Kilroy,” a 4-part comedy. Kilroy, the elusive, legendary character who struck like a phantom and left his familiar mark, “KILROY WAS HERE,” everywhere he went during World War II, is brought to life by Disney.

1920 – Cartoonist Hank Ketcham, best known as the creator of Dennis the Menace, is born in Seattle, Washington.

1942 – Mickey Mouse, Donald Duck, Pluto, and Dumbo appear on the cover of this day’s Liberty (a weekly, general-interest magazine).

1972 – “Help Me Make It Through The Night” is a double-winner during the 14th annual Grammy awards in New York, claiming Best Country Song for Kris Kristofferson and Best Country Vocal Performance, Female, for Sammi Smith.

1975 – At Disney World, the film Magic Carpet ‘Round the World is shown for the last time at the Circle-Vision 360° Theater. Running since 1974, the film took guests on a tour of landmarks spread across the four corners of the globe.

1980 –  Quincy Jones received a star on the Hollywood Walk of Fame.

1981 –  Eric Clapton had bleeding ulcers and was admitted to United Hospital in St. Paul, Minnesota.

2000 – The audio CD Color, Rhythm and Magic: Favorites From Disney Classics by jazz pianist Earl Rose is released. Tracks include “Go the Distance,” “A Dream Is A Wish Your Heart Makes,” and “Bella Notte.” (Emmy Award winning composer/pianist Earl Rose is one of the most versatile and prolific composers in film and television today.