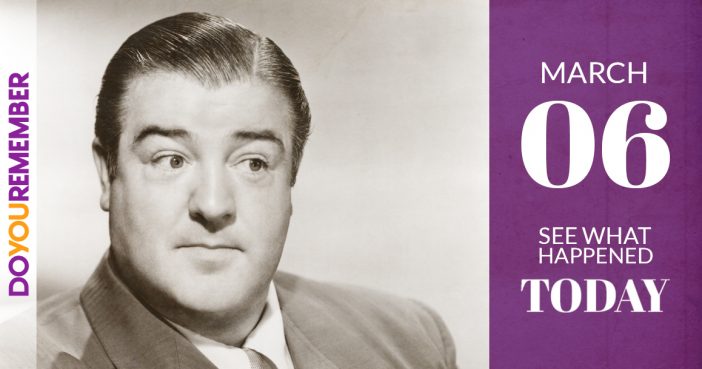 1955 – Country music makes its first major inroads in the UK when Tennessee Ernie Ford’s “Give Me Your Word” climbs to the top of the charts.

1957 – The vocal group The Diamonds becomes the first Canadian outfit of the rock era to have a hit in the US when “Little Darlin’,” a cover of a song by American doo wop group the Gladiolas, reaches Number 2.

1962 – Frank Sinatra recorded his final session with Capitol Records in Hollywood, California.  He then recorded exclusively for his own Reprise label.

1965 – Beatles ’65 was the #1 album for the ninth week in the United States with the “Goldfinger” Soundtrack and the “Mary Poppins” Soundtrack the next best.

1965 – Roger Miller ruled the Easy Listening chart for the fourth week with “King Of The Road”.

1965 – After four releases, the Temptations had not only their first Top 10 but also their first #1 song–“My Girl”.  Gary Lewis & the Playboys relinquished with “This Diamond Ring” and the former #1 “You’ve Lost That Lovin’ Feelin'” by the Righteous Brothers was third.

1971 – The Temptations had not only their 10th #1 song on the R&B chart but incredibly the 19th song to make the Top 3 in that genre with “Just My Imagination (Running Away With Me)”.

1971 – The Osmonds remained at #1 for the third week with “One Bad Apple”, holding off “Mama’s Pearl” from the Jackson 5

1973 – John Lennon’s visa extension was canceled by the Office of the Immigration Department in New York State.  The extension had been approved just five days previous.

1976 – EMI Records re-released all 22 British Beatles singles and “Yesterday” was released for the first time in the U.K. as a 45.

1976 – The Sylvers grabbed the top spot on the R&B chart with “Boogie Fever”.

1976 – Although Smokey Robinson had left for a solo career, the Miracles rose to #1 with “Love Machine”.

1982 – Dick Clark donated the podium he used for decades on American Bandstand to the Smithsonian Museum.

1982 – The Go-Go’s had themselves a #1 album as Beauty and the Beat topped all challengers.  Escape from Journey was second.

1982 –  “Through The Years” by Kenny Rogers was the new #1 on the Adult Contemporary chart.

1993 – Peabo Bryson & Regina Belle had the new #1 song with “A Whole New World”, ending one of the most spectacular runs of the Rock Era.

1993 – For the 13th week, “The Bodyguard” Soundtrack was #1 on the album chart.  Breathless from Kenny G was second.  Pearl Jam (Ten from #9) and Michael Jackson’s Dangerous both entered the Top 10.

1957 – The Disneyland television series airs “Man in Flight.” Disney takes viewers through the history of aviation and entertains them with an insider’s look at the Disneyland attractions that send guests soaring over the park.

1959 – The TV series Walt Disney Presents airs  “Texas John Slaughter – The Man from Bitter Creek,” starring Tom Tryon. It is the 5th of a 17 episode mini-series.

1977 – An Evening With Diana Ross was televised by ABC.

1888 – The City of Marceline, Missouri (the future boyhood home of Walt Disney) is incorporated. Located 6 miles south of US Highway 36 on Missouri Highway 5, the Disneys will arrive in Marceline in 1906 and stay for about 4 years.

1886 – “The Nightingale” was first published. It was the first magazine for nurses.

1948 – Musical theater lyricist and composer Stephen Schwartz is born in New York City. He collaborated with composer Alan Menken for Disney’s Pocahontas, The Hunchback of Notre Dame and Enchanted. He also wrote music and lyrics for the original television musical, Geppetto, broadcast on The Wonderful World of Disney in 2000. (Schwartz has written such hit musicals as Godspell, Pippin and Wicked.)

1955 – The Los Angeles Examiner runs the story “Giant Disneyland Hotel Gets Under Way.”

1963 – Various versions of the song “There’s A Great Big Beautiful Tomorrow,” written by  Richard M. and Robert B. Sherman, are recorded for a Disney attraction that will be  featured in the upcoming New York World’s Fair. Disney staff composer Buddy  Baker has arranged the tune in different musical styles to fit the Carousel of Progress (an attraction to be featured  in the General Electric Pavilion)

1964 – After rumors swirl of a torrid off-screen romance with co-star Richard Burton on the set of her latest movie, Cleopatra, Elizabeth Taylor is divorced by her fourth husband, Eddie Fisher.

1970 – On trial for his role in the infamous Tate-LaBianca murders, Charles Manson assembles a collection of home recordings to help pay for legal expenses.

1982 – National Basketball Association history was made when San Antonio beat Milwaukee 171-166 in three overtime periods to set the record for most points by two teams in a game. The record was beaten on December 13, 1983 by the Pistons and the Nuggets when they played to a final score of 186-184

1989 –  Smokey Robinson’s autobiography Inside My Life was released.