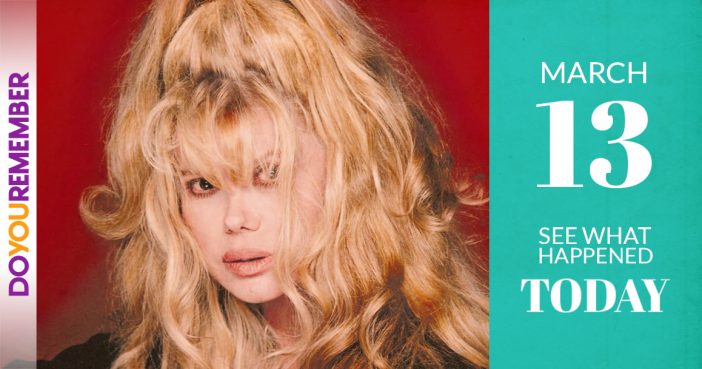 1956 – Elvis Presley released his self-titled debut album on RCA Records, believed to be the first album to sell one million copies.

1965 – The Soundtrack to “Mary Poppins”, which had hung around the top for several weeks, finally became the #1 album.

1966 – Pink Floyd debuted live at the Marquee Club in London.

1971 – The Carpenters remained at #1 on the Adult chart for the third week with “For All We Know”.

1971 – The Osmonds incredibly remained at #1 a fourth week with “One Bad Apple”, even though most radio stations had other songs at #1 by now

1976 – The Jackson 5 left Motown Records for Epic and changed their name to the Jacksons.

1976 – Eagles/Their Greatest Hits 1971-1975, which debuted at #4 the previous week, was the new #1 album.  Very few groups could put out a greatest hits package after five years and have it be the top-selling album of all-time but that is what happened with this release.

1980 – Willie Nelson was at #1 on the country chart with “My Heroes Have Always Been Cowboys”, the title of a song from the soundtrack to the 1979 film The Electric Horseman, (starring Robert Redford and Jane Fonda and directed by Sydney Pollack). Written by Sharon Vaughn, it become his fifth #1.

1981 – The single “Watching The Wheels” by John Lennon was released posthumously.

1982 – Most people wouldn’t hear of this Canadian until the following year, but on this date, he first entered the chart with his debut single–“Lonely Nights”.  Bryan Adams no doubt celebrated heartily.
1982 – The J. Geils Band held on to #1 for a sixth week with “Centerfold” while Journey’s “Open Arms”, which was a better record, stayed at #2.

1987 – George Strait was at #1 on the country chart with Ocean Front Property, his seventh studio album and Strait’s first to debut at #1 on the Billboard Top Country Albums Chart. It was ranked #5 on CMT’s list of 40 Greatest Albums in Country Music in 2006.

1987 – Bryan Adams released “Heat Of The Night” as a cassette single (or a cassingle, as it was called), the first of its kind.

1993 – Unplugged, the new album from Eric Clapton, was the new #1, taking over for “The Bodyguard” Soundtrack.

1999 – Cher became the oldest woman to ever have a #1 song when “Believe” reached the top.

1965 – Tom Jones made his television debut on The Billy Cotton Band Show on BBC-TV.

1962 – James Darren was a guest star on the television show Voyage to the Bottom of the Sea on ABC.

1930 – Clyde Tombaugh, an astronomer at the Lowell Observatory in Flagstaff, Arizona, discovers the ninth planet Pluto.

1936 – The Tulsa Tribune quotes writer Thornton Wilder as telling a lecture audience, “The two presiding geniuses of the movies are Walt Disney and Charlie Chaplin.”

1947 – At the 19th Annual Academy Awards (held at the Shrine Auditorium in Los Angeles), the Walt Disney Studio Sound Department wins an Oscar for innovations in locating noise in sound tracks.

1936 -Work on the Boulder Dam is now complete two years ahead of schedule.

1959 – On Friday the 13th, the Kingston Trio are nearly killed when their plane makes an emergency landing on a turkey farm in South Bend, IN.

1979 – Olivia Newton-John received the Officer of the Order of the British Empire medal from Queen Elizabeth at Buckingham Palace in London.

1987 – Bob Seger & the Silver Bullet Band received a star on the Hollywood Walk of Fame.

1990 – This was an event that usually would only happen in a fantasy movie. An off-duty policewoman and her dog were “sucked up” by a tornado and carried 25 feet, along with other debris such as tree branches and mud.

1997 – Thousands of people report seeing a huge carpenter’s square-shaped UFO including the Arizona Republican governor Fife Symington the phenomena is known as the Phoenix Lights and although many theories have been put forward for what the lights were, many of those that saw them are still convinced they were a V-shaped UFO.