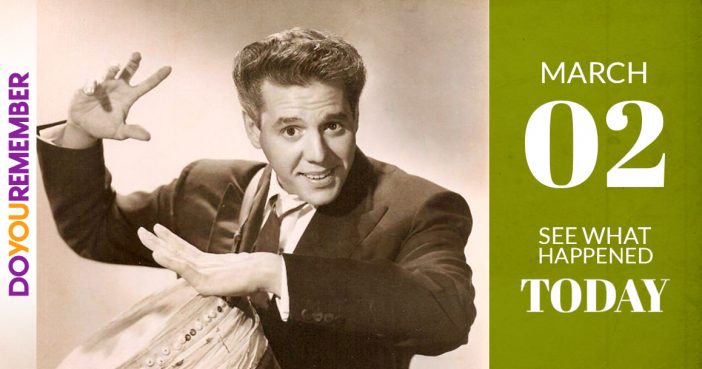 – Check out the clips in the links below –

1957 – Most Rock Era fans would not get to know this artist until her 1959 hit “Sweet Nothin’s” but on this date, Brenda Lee first appeared on the chart with her debut single “One Step At A Time”.

1957 – This artist would capture attention the following year with “Stagger Lee” but on this date, Lloyd Price first appeared on the chart with his debut single “Just Because”.

1959 – Lloyd Price remained a fixture at #1 for the fourth week on the Popular chart as well with “Stagger Lee”.  “Venus” by Frankie Avalon was hot, moving from 28 to 7.

1961 – The Everly Brothers had the new #1 song in the U.K. with “Walk Right Back”, a song written by Sonny Curtis of the Crickets.

1963 – The 4 Seasons became the first group to have three straight #1 songs when “Walk Like A Man” hit the top.

1964 – The Beatles released “Twist And Shout” in the United States on Tollie Records.

1967 – At tonight’s Grammy Awards in Los Angeles, Record and Album of the Year go to Frank Sinatra for his comeback hit “Strangers In The Night” and the album Sinatra, A Man And His Music, respectively.]

1967 – The Supremes recorded the innovative “Reflections”.

1974 – Planet Waves by Bob Dylan & the Band remained #1 on the Album chart for the third week.

1974 – Diana Ross ruled the Adult chart for a third week with “Last Time I Saw Him”.

1985 – Phil Collins had the top U.K. album with No Jacket Required, which would remain on top for five weeks.

1985 – Diana Ross had the top R&B song for a third week with her touching tribute to the late Marvin Gaye, “Missing You”.

1985 – Wham! had #1 on the Adult Contemporary chart with “Careless Whisper”, its fourth week at the top.

1991 – Madonna became the highest-debuting female artist of the Rock Era when “Rescue Me” debuted at #15.

1991 – Mariah Carey had sat behind albums like M.C. Hammer’s Please Hammer Don’t Hurt ‘Em and To the Extreme by Vanilla Ice.  It was time for quality to come to the top and Mariah outlasted the flavors of the month with her debut album which reached #1 on this date, 36 weeks after release.

1955 – The Disneyland television series airs “From Aesop to Hans Christian  Anderson.” Walt hosts a cartoon tribute to the old storytellers of the past.

1985 – The Disney Channel airs “Alive or Dead,” the 25th episode of the series The Edison Twins.

1944 – Disney is shut out at the 1943 Academy Awards, held at Grauman’s Chinese Theatre (hosted by Jack Benny). Although nominated for Best Sound Recording for Saludos Amigos, Walt Disney Sound Department is edged out by RKO Radio Studio Sound Department for This Land Is Mine. Songwriters Charles Wolcott & Ned Washington’s tune “Saludos Amigos” loses to “You’ll Never Know” (from the film Hello, Frisco, Hello) in the Best Music, Song category. Disney’s animated Reason and Emotion is beat out in the Short, Subjects, Cartoon category by MGM’s Yankee Doodle Mouse.

1957 – In an attempt to appeal to the adult record-buying public, Disneyland Records runs an ad in Billboard.

1960 – Elvis Presley, having completed his stint with the US Army’s 1st Medium Tank Battalion, 32nd Armor, leaves Germany and a tearful, teenage Priscilla Beaulieu behind to return to American civilian life. On the way, his plane refuels in Scotland’s Prestwick Airport, marking the first and only time The King will set foot in the UK.

1994 – Nirvana performed for the final time at The Terminal Eins (3,000 capacity) in Munich, Germany.

1995 – Bill Berry of R.E.M. suffered a brain aneurysm while performing at the Patinoire Auditorium in Lausanne, Switzerland.

1995 – The Lion roars at the 37th Grammy Awards, held at the Shrine Auditorium. Best Pop Vocal Performance, Male is awarded to Elton John for his “Can You Feel the Love Tonight.”

1968 – British teen heartthrob Cat Stevens, suffering badly from pneumonia, is hospitalized in London. After his recovery, he would experience a spiritual awakening which would lead directly to his reinvention as a singer-songwriter.

1983 – Sony and Philips, working together, introduce a new music format to the US. Called a “compact disc,” it’s a five-inch wonder which runs one hour of playing time.

2000 – The Orlando Sentinel reports that Walt Disney World is planning a space exploration attraction that has intrigued NASA. The Space Pavilion, expected to open at Epcot in 2003, would feature a series of interactive exhibits and shows describing space exploration, culminating in a motion-simulator ride similar to what NASA astronauts use to prepare for space flight.