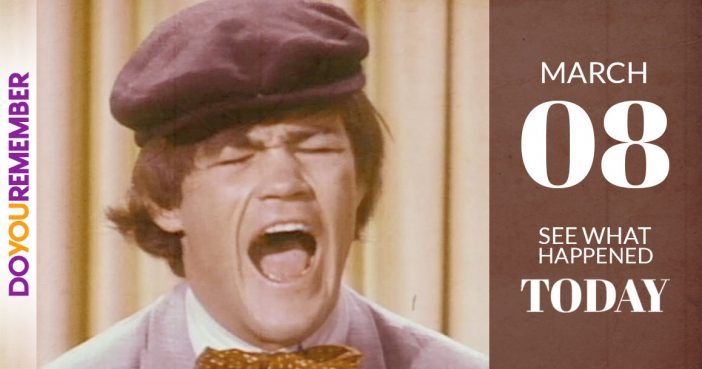 1967 – The Adventures of Bullwhip Griffin

1954 – Herb McKenley set a world record for the quarter mile when he ran the distance in 46.8 seconds.

1975 –  “Have You Never Been Mellow” by Olivia Newton-John was the new #1 on the Adult chart. The Doobie Brothers were right behind with “Black Water” with Frankie

1976 –  Silver Convention released the single “Get Up And Boogie”.

1980 –  Chuck Mangione returned to #1 for a third week on the Adult Contemporary chart with his theme to the Winter Olympics–“Give It All You Got”.

1985 – The Internal Revenue Service (IRS) reported that 407,700 Americans were millionaires.

1964 –  The Dave Clark 5 made their debut appearance by performing “Glad All Over”on The Ed Sullvan Show.

1964 – NBC-TV airs part one of the Walt Disney’s Wonderful World of Color episode  “For the Love of Willadean.”

1970 – The Wonderful World of Disney features part two of “Menace on the Mountain”.

1979 –  The John Denver and the Ladies (Tina Turner and Cheryl Ladd) television special was broadcast on ABC-TV.

1945 – Emmy Award-winning composer Bruce Broughton, whose music can be heard throughout Disney theme parks and in Disney’s The Rescuers Down Under and Bambi II, is born in Los Angeles, California. .

1961 – Max Conrad circled the globe in a record time of eight days, 18 hours and 49 minutes in the Piper Aztec.

1970 –  Diana Ross was in concert for the first time as a solo artist with an eleven-day engagement at Monticello’s in Framingham, Massachusetts.

1976 – NFL wide receiver Hines Ward is born in Seoul, South Korea, to an African American father and a Korean mother.

1986 – The Pirates of the Caribbean and Alice’s Tea Party attractions both open in Tokyo Disneyland.

1976 – A likeness of Elton John was unveiled at Madame Tussaud’s Wax Museum in London.  Elton was the first rock star to be so honored since the Beatles.

1986 – Randy Travis makes his debut on the Grand Ole Opry.

1987 – Mike Tyson became the youngest heavyweight titleholder when he beat James Smith in a decision during a 12-round fight in Las Vegas, NV.

1997 – Disneyland’s Pirates of the Caribbean reopens after being renovated.

1999 – Disney’s Doug Live! Officially debuts in the ABC TV Theater at the Disney-MGM Studios in Florida.

Previous article: Most Valuable Toys From Yesteryear
Next Post: The Most Iconic Celebrity Hairstyles