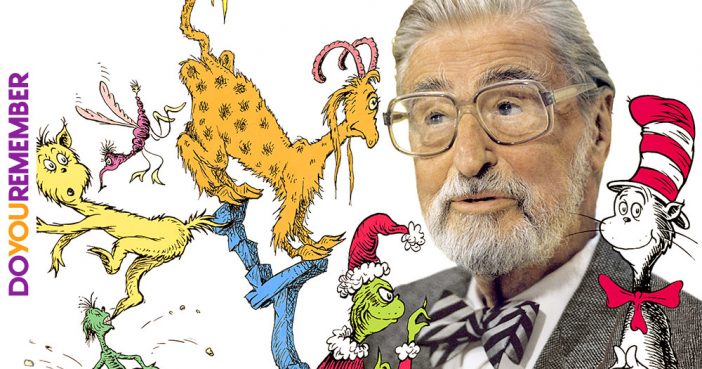 Life Lessons we learned from Dr. Seuss… Remembering you, dear Dr. Seuss. We’d love you even if you were a moose. You taught us to count different colors of fish And told us to eat a really weird dish. Your drawings are great and your stories are better, We’re sure everyone loves them, even Eddie Vedder.

To celebrate your life, here’s a post about you, And all of things that you taught us to do. You’re so wise and we hope to be slightly as cool But it’ll be pretty hard—you basically rule. So once more, we love Theodor Seuss Geisel, Here’s to you and your legacy that no one can stifle.

Your imagination is your only boundary.

Dr. Seuss let nothing confine his wild creativity—not even the 26 letters of the alphabet. In On Beyond Zebras!, Seuss made up letters beyond Z and animals whose name corresponded to each.

Children are smarter than we think.

So forget about lying to your kids about where babies come from, the war in Syria, or any other serious issue you might think is beyond their grasp. Seuss’ works were often allegories for larger societal issues: The Lorax reflects on consumerism and champions environmentalism, Horton Hears a Who! promoted anti-isolationism, and “The Sneetches” took on racial equality.

Why think up something totally new when you can update something you’ve already done? Many of Dr. Seuss’ illustrations—such as his whales, elephants, the tower of turtles from “Yertle the Turtle,” and the connected beards in Did I Ever Tell You How Lucky You Are?—first appeared in his earlier political cartoons and advertising work.

Most famously, he repurposed Marvin K. Mooney Will You Please Go Now! to make a political statement during the Watergate scandal. On one of the book’s cover, Seuss crossed out the words “Marvin K. Mooney” and wrote in “Richard M. Nixon.” The markup was printed in The Washington Post nine days before Nixon resigned.

The Cat in the Hat was created to be a simple book. In 1954, Life published a study that said illiteracy was on the rise among young children because books geared toward them were boring. William Ellsworth Spaulding, the director of the education division at Houghton Mifflin, wrote a list of 348 words that first graders should be able to recognize.

Spaulding asked Dr. Seuss to cut the list down to 250 and use only those in a book meant to help first graders read. Nine months later, The Cat in the Hat was completed. It used 236 words from the list, and was simple enough for young readers to understand and enjoy.

The two were posthumously brought together again, as scientist Dr. Seuss’ papers are housed in the Geisel Library at the University of California, San Diego

His birthday, March 2nd, has been adopted as the National Read Across America Day in honor of his mission of making books accessible to all audiences.