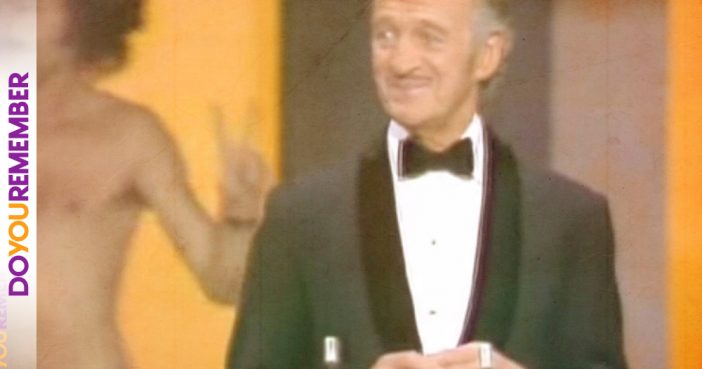 From the red carpet to the live performances to the acceptance speeches, there is so much detail to comb over at an Academy Awards presentation you can practically drive yourself crazy. The sensually rich, over-the-top production is always worth a look, and in anticipation of this year’s event on Sunday night, we at DoYouRemember can’t help but look back at iconic Oscar moments from the past.

The British auteur wasn’t one for vanity or press. So on the occasion of his honorary award for lifetime achievement, he gave the media little to mull over the next day, briskly walking on stage and saying a few curt words. Apparently he was upset that he never won an actual Oscar, and saw this award as thin compensation.

Before taking her Oscar-winning role in 1977’s Julia, Vanessa Redgrave had sponsored and produced a pro-Palestinian documentary. Her nomination caused members of the Jewish Defense League to speak out against her, but she nevertheless won. Redgrave suffered an incredibly negative backlash after making anti-Zionist remarks during her acceptance speech.

This was the closest anyone has ever come to crowd surfing at the Oscars. Thank God it came from an extremely talented Italian actor and director responsible for making one of the most heartwarming Holocaust movies of all time. Otherwise it would be a tad gauche.

The iconic star became involved with the American Indian Movement in the early 1970s, and decided to boycott the Oscars when he was nominated for Best Actor for The Godfather in 1973. When he won, in his place the AIM sent Sacheen Littlefeather (born Marie Cruz) to read a statement protesting Hollywood’s depiction of Native Americans and describing the recent events at Wounded Knee, South Dakota, where approximately 200 Oglala Lakota had taken over the town.

Allen has famously snubbed the Academy Awards as a superficial popularity contest since the days of his early films. But when board members called on him to give this post-9/11 tribute to New York, he gladly said a couple of heartwarmingly hilarious words.

The ’70s were all about streaking, and the Oscars were no exception to the trend. Watch debonair Pink Panther actor David Niven chuckle his way through the bare-assed caper.

Fresh off the heels of a win for his critically acclaimed anti-gun documentary, Bowling for Columbine, Moore invited all his fellow nominees on stage to make a statement against neoconservative America. Though he was booed and cut off mid-sentence by the orchestra, Moore still managed to spice up the year’s festivities.

Though it rarely occurs, ties in the Oscar tally are feasibly possible. Hepburn (Best Actress for The Lion in Winter) and Streisand (the same for Funny Girl) were forced to share the honors, and handled it as best as self-centered actresses could: One of them didn’t show up.

Disney Gets a Special Oscar

Snow White and the Seven Dwarfs was the first full-length animated feature film, and to honor its innovation, the Academy gave Disney an Oscar complete with seven miniatures.

After thanking his co-stars, director, producers and managers when he won Best Actor for the AIDS drama Philadelphia, Hanks went on to thank his high-school drama teacher, and former classmate, both of whom are gay. One tiny problem: They were not out at the time. The incident inspired Paul Rudnick to write the script for the 1997 film In & Out.

Trey Parker and Matt Stone knew exactly how to satirize the beauty pageant-esque vibe the Oscars give out, showing up as Gwyneth Paltrow and Jennifer Lopez at the 2000 show. They claim to have been on LSD.

If you want to get through Anna Paquin’s annoying intro, fast-forward to 1:10. Sam Jackson is no sore loser, but he probably expected to win the award for his great role in Pulp Fiction. When he didn’t, he made sure everyone in America knew he was pissed.