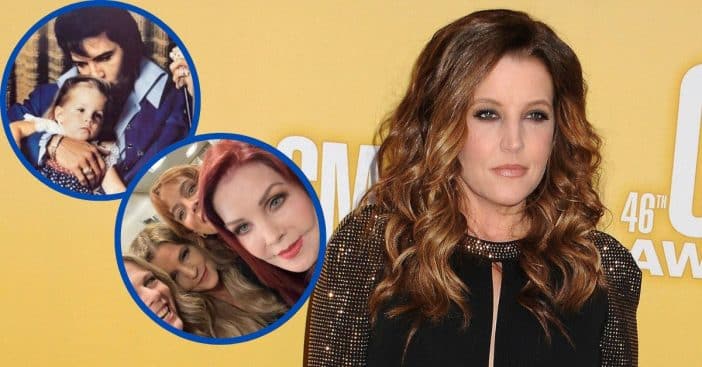 On January 12, news broke that Lisa Marie Presley suffered a heart attack and was being hospitalized; hours later, word of her death had spread. Lisa Marie, the only daughter of Elvis with Priscilla Presley, was just 54 when she passed and Hollywood is stunned by her loss. Among the celebrities reacting to her death are those who knew Lisa Marie personally and those who admired her as fans.

First there was the initial announcement from Priscilla that Lisa Marie was hospitalized. “My beloved daughter Lisa Marie was rushed to the hospital,” she informed her followers on the evening of January 12. “She is now receiving the best care. Please keep her and our family in your prayers. We feel the prayers from around the world, and ask for privacy during this time.” Sadly, everything after that has been a message of mourning.

Most heartbreaking of all in the flood of reaction posts following Lisa Marie’s death came from her mother Priscilla. She shared a statement with People later that night that announced, “It is with a heavy heart that I must share the devastating news that my beautiful daughter Lisa Marie has left us. She was the most passionate strong and loving woman I have ever known.” Priscilla added there would be no further comments and that the family asks for privacy.

lisa marie presley… how heartbreaking. i hope she is at peace in her dad’s arms. my heart goes out to her family. too much grief in just a couple of years. #riplisamarie #LisaMariePresley

Meanwhile, the music world grieves with her. Herself a singer-songwriter, Lisa Marie built a music career of her own that included three albums, the first of which was Gold certified with the Recording Industry Association of America. As a result, she developed support in the industry, including from country music artist LeAnn Rimes, who tweeted, “lisa marie presley… how heartbreaking. i hope she is at peace in her dad’s arms. my heart goes out to her family. too much grief in just a couple of years.”

A constant state of mourning

Over on Instagram, John Travolta of Grease fame mourned, “Lisa baby girl, I’m so sorry. I’ll miss you but I know I’ll see you again. My love and heart goes out to Riley, Priscilla, Harper and Finley.” He is referring to Lisa Marie’s surviving children. It has been a mournful past few years for Travolta, as he said untimely farewells to his wife Kelly Preston and his former Grease co-star Olivia Newton-John and his Look Who’s Talking alum Kirstie Alley.

Then there is a post by Linda Thompson, who had been very close with Elvis Presley. When news of Lisa Marie’s hospitalization broke, Thompson first said, “I am fervently praying for someone I have always held so near & dear to my heart. Please join me in sending out your best thoughts, love, prayers, and well wishes for a full and speedy recovery for her.” Sadly, her next post was a short, devastating, “My heart is too heavy for words.”

By time of writing, there is no social media post by Nicolas Cage, but he and Lisa Marie had been married from 2002 to 2004, and he said in a statement to The Hollywood Reporter, “This is devastating news. Lisa had the greatest laugh of anyone I ever met. She lit up every room, and I am heartbroken. I find some solace believing she is reunited with her son Benjamin.”

Lisa Marie’s death has left many shocked and heartbroken by the loss itself and the sudden nature of it. Lily Tomlin said she was “heartbroken” by the death of Lisa Marie, “A talented, smart, Beautiful soul, woman who loved and adored her children.”

Meanwhile, Tom Hanks and Rita Wilson mourned the loss of a friend and someone they got to work with closely because of Hanks’s role as Colonel Tom Parker in the Elvis biopic. “Tom and I had spent some time with the family during the Elvis movie promotional tour,” Rita shared. “She privately showed us her home, Graceland, and she made it feel like home to us. She was so gracious to us, Austin, Baz, and guests. If you haven’t heard her music please go listen. She had a sultry voice, a power and tenderness, that I have always loved. Our hearts and our prayers go out to Riley, Harper, Finley , Danny and Priscilla. A mother should never have to lose a child. Lisa Marie lost her precious son Benjamin, Priscilla loses her only daughter. It’s too much.”