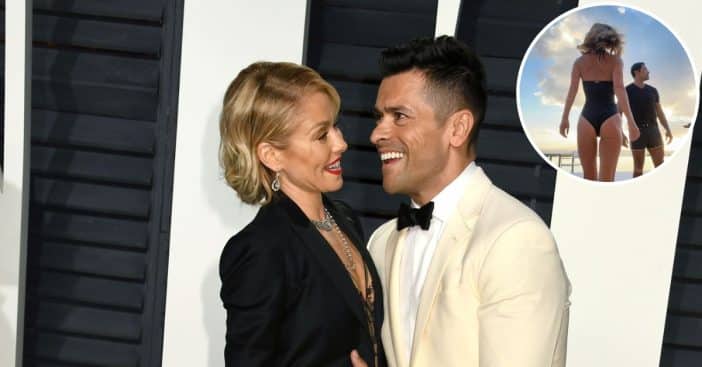 Hollywood couple Kelly Ripa and Mark Conseulos love to go on trips and adventures together. Kelly makes sure to share photos of their fun vacations on social media, especially ones with them rocking swimsuits. The lovers met in 1995 at an audition and tied the knot the following year.

It has been over twenty-five years since they got married, and they share three children; two boys, Michael and Joaquin, and a girl, Lola, who is quite expressive about how unimpressed she is of her parent’s PDA photos online. Kelly loves to show off her man and his hunky body on her Instagram.

The Morning Show host posted a throwback of herself and Consuelos ahead of the New Year 2023. The photo featured her back view, in a black one-piece, and her handsome husband in the background looking away.

“#tbt 2020. Threw backside and had a cheeky new year,” she captioned the photo.

RELATED: Kelly Ripa ‘Accidentally Harassed’ Mark Consuelos During His ‘All My Children’ Audition

Showing Off Her Man

Kelly never missed a chance to show off her man, Consuelos. She took a photo with her hubby, where they both wore stylish dark sunglasses, and Kelly donned a necklace with their kid’s initials on it. In another photo, Consuelos sat solo in the sand with white trunks and a pair of sunglasses.

She also shared another shot of her beau in glasses, and red trunks, relaxing by the pool. “I give you my forever #mcm,” she wrote. Both are lovers of the beach and islands, as Kelly revealed in a 2018 post, stating in her caption that they have “left over a million sandy footprints on various beaches” since being together. “…We did the math,” she added.

Kelly and Consuelos are the ultimate PDA couple, holding nothing back in showing how attracted they still are to each other. She shared a shot of them kissing on a beach in 2018 and another of her lover staring at her bent-over bum more recently, with a caption, “When the end is in sight….”

Another adorable selfie from 2016 featured Consuelos nibbling on her shoulder with them both in swimsuits as usual. While many people find their PDA cute, Kelly and Consuelos’ daughter, Lola, is not a big fan of it— or Kelly’s clothes.

“She just feels that what I wear is embarrassing and awful. But then I think that means that I’ve gotten something right,” Kelly told People. “I don’t think your teenage daughters should like what you’re wearing.”