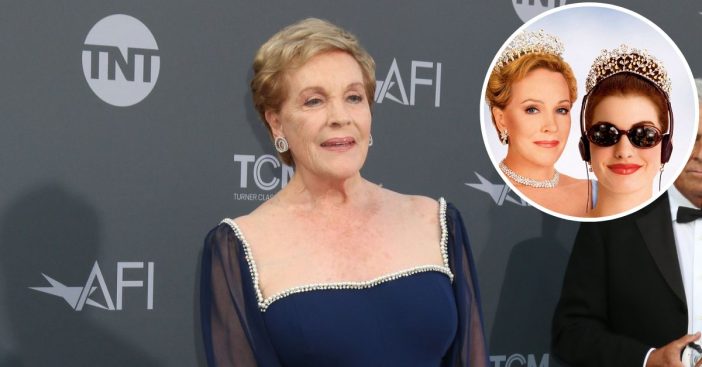 A new Princess Diaries installment is in the works, and while there has been a script for the movie since 2019, according to Anne Hathaway, they are making sure it is “perfect” for release. However, Julie Andrews, who played Queen Clarisse Renaldi, the grandmother to Mia Thermopolis, Anne Hathaway’s character, says she “probably” won’t star in the third Princess Diaries.

Andrews is well-known for a number of roles she’s had, including Princess Diaries, but the actress was a significant character in older iconic classics like The Sound of Music and Mary Poppins. “Children today know me better for The Princess Diaries than they do for even Poppins, because of course Poppins was made, oh gosh— close to 60 years ago, let’s face it,” Andrews told Vanity Fair.

In her interview with Access Hollywood, Andrews, 87, revealed why she is unlikely to be on the new Princess Diaries. “I think we know that it’s probably not going to be possible. It was talked about very shortly after ‘The Princess Diaries 2: Royal Engagement’ came out, but it’s now how many years since then? And I am that much older and Annie the princess, or queen, is so much older,” Andrews said. “And I am not sure where it would float or run. In terms of us doing it, I very much doubt that now.”

On the other hand, her on-screen granddaughter, Hathaway, looks forward to playing Princess Thermopolis again, as she expressed on Watch What Happens Live With Andy Cohen in 2019. “…I want to do it,” Hathaway said on the show. “… We all really want it to happen. It’s just we don’t want to do it unless it’s perfect because we love it just as much as you guys love it.”

Andrews recounted her experience in the making of the movie, noting that her favorite part was how late Garry Marshall, the movie director made sure she looked “gorgeous” and made her feel like a “queen” during filming. According to the actress, Marshall made getting into character much easier by ensuring she was comfortable and had all she needed.

“Garry said, ‘What do you like?’ I said, ‘I love real flowers, and I love my garden.’ So, we had real flowers on the set, and every day fresh ones. It was lovely,” Andrews recalls. Hathaway also attributes her favorite moments on set with Andrews, remarking that acting alongside the elderly actress is “a dream come true” for her.

“Getting to make it and be on set every day, I got to hug Julie Andrews every day. That part was also very, very, very magical,” she told People in 2019. Per the third installment of the Princess Diaries franchise, The Hollywood Reporter and The Wrap reported that Disney currently has it in the works, but Hathaway is yet to sign on.