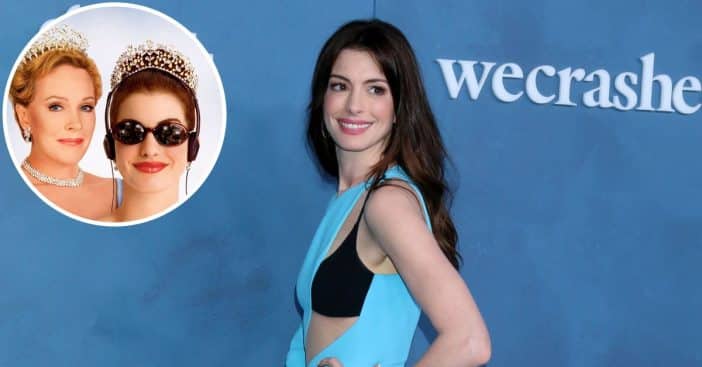 Anne Hathaway shot to fame with her role in Princess Diaries at the age of 18 in 2001, which was followed three years later by The Princess Diaries 2: Royal Engagement. She acknowledged this to People in 2019, saying that the movie franchise made her “a superstar to six-year-olds.” She claimed, “I got very, very, very famous.” Hathaway also added that she felt in sync with her role as Princess Mia Thermopolis when she first held the script: “I touched it, and it was electric.”

One of the highlights for Hathaway while filming Princess Diaries was meeting Julie Andrews. In the movies, the 87-year-old icon played grandmother Queen Clarisse Renaldi to Hathaway. It is reported that a second sequel is in the works; however, Andrews is unlikely to star in it.

There was one thing in particular that allowed Hathaway to enjoy her time on the Princess Diaries set: “Getting to make it and be on set every day, I got to hug Julie Andrews every day,” she gushed to People. “That part was also very magical.”

Hathaway also recalls meeting director Garry Marshall — who died from pneumonia complications and a stroke in 2016. “Pretty Woman was my favorite movie growing up,” Hathaway said. “I got to meet the director of that. How extraordinary.”

It was also a delight working with Hathaway on Andrews’ part. “[She] was incredibly talented. Her instincts were so true,” Andrews told Vanity Fair. “It was great fun to watch her growing and learning. I think that I probably was a bit of a mum to her, too, and we’re great friends.”

Of her appearance in a possible new Princess Diaries movie, Andrews told Access Hollywood, “I think we know that it’s probably not going to be possible.” She didn’t elaborate on her comment, but one can assume she was referring to her current age of 87.

On the contrary, Hathaway is hopeful for another sequel and assured fans in 2019 on the Watch What Happens Live, “We all really want it to happen. It’s just we don’t want to unless it’s perfect, because we love it just as much as you guys love it. It’s as important to us as it is to you, and we don’t want to deliver anything until it’s ready, but we’re working on it.”