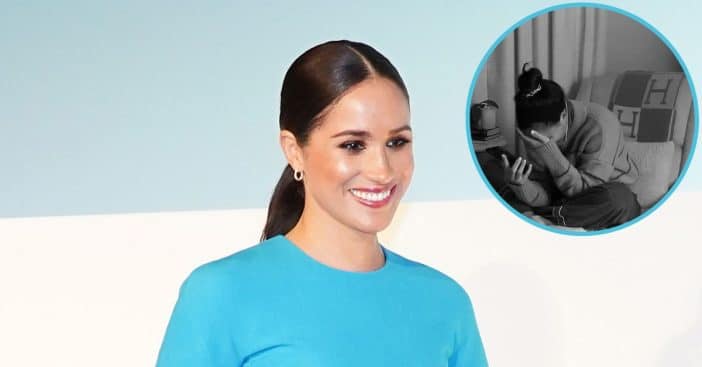 The trailer for Meghan Markle and Prince Harry’s Netflix documentary dropped on Thursday, December 1, and a specific photo that shows the Duchess of Sussex crying has generated discussion on social media. The video features a collage of the never-seen-before pictures of the royal couple and why they opted to produce the doc.

The sensational trailer detailed Meghan crying three times throughout the 59-second footage. However, only one of those times caught the viewer’s attention, as netizens considered it staged. “Nothing more heartbreaking than seeing Meghan in tears on her $3000 Hermes blanket. But as good fortune would have it – from a producer’s point of view- all being captured for use in the show!”

The Duchess of Sussex was captured sobbing in a black-and-white photograph while sitting cross-legged in an armchair, holding her phone in one hand and covering her face with the other. The image, which was supposed to project sincerity, was flawed when netizens spotted a $2,340 cashmere Hermes throw rug placed casually on the chair behind her.

The startling image has gathered interest since the explosive teaser for the six-part special, which is rumored to debut on Netflix by next week, was released.

RELATED: Royal Expert Claims Meghan Markle Has ‘Made A Lot of Enemies’ After Playing The ‘Victim’

Twitter users were less than impressed by this act of emotion and subsequently mocked the Duchess. Some even claimed they would set things right with a bit of fundraising. One user mocked, “Where can I give to her GoFundMe for another Hermes blanket… no one should live like this.”

Also, an angry user explained his theory about how Meghan’s marriage to Prince Harry has been a disaster for the royal family. “This photo sums up perfectly the Meghan Markle con. ‘Boo-hoo!  I managed to convince the dumbest Royal to marry me, and now all I can do is cry into my Hermes blanket because I’ve alienated his family with my nastiness; but you feel sorry for me, don’t you?”

“Celebrity sob stories often attract controversy, as mere mortals find it hard to relate from the get-go,” Lexie Cartwright of News AU wrote. “Throw in those problems being chronicled for lucrative TV shows filmed from multimillion-dollar mansions, and an attempt to garner understanding often turns into a bitter cocktail of tone deafness and entitlement.”

It seems the photo is not the only controversial debate as regards the trailer, as many people have also slammed the couple’s act in the teaser as misleading and craving unnecessary sympathy. “The part where she only invites one black family member to her wedding and then accuses the RF and Britain are racist. So brave and heroic. I welled up, one tear…left eye.”

Also, royal expert Daniela Elser blasted the couple for their weepy trailer antics during her column for news.com.au. “Does anyone, after watching this trailer, really think we are in for a nuanced portrait of the competing demands of personal happiness versus duty?” she wrote. “That there might be any real acknowledgment of their extraordinary privilege, both materially and the global platform afforded to them as frontline members of the royal family? (The Hermès blanket moment nearly seems like a parody.”