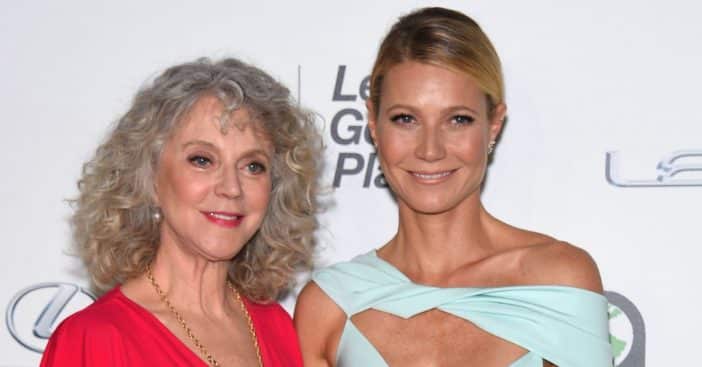 Oral cancer is not particularly new to actress Blythe Danner, as her husband, Bruce Paltrow, died from the disease in 2002. Coincidentally, the Emmy Award winner revealed recently in an interview that she battled the same ailment, but she is lucky to have entered remission.

“Everyone is touched by cancer in some way,” she revealed. “But it’s unusual for a couple to have the same cancer.” Danner noted that after her condition was confirmed, she had thoughts of her husband lingering in her mind, “I remember I looked up at heaven and said to Bruce, ‘Are you lonely up there?’”

Danner noticed the symptoms of the disease in 2018 while working in London. “I started feeling very woozy, and I was forgetting everything,” she stated. “And then I felt a lump in my neck, right next to where Bruce had found his [in 1999].” She was subsequently diagnosed with adenoid cystic carcinoma, an uncommon type of oral cancer growing in the salivary gland.

The 79-year-old kept her ailment a secret from her children for quite some time to avoid making them anxious. “I was obviously very shocked,” her daughter Gwyneth said when she finally learned about the situation. “It was scary. And it felt really eerie, because it was so similar [to my dad’s].”

The actress underwent different treatments, which included surgeries and other alternative therapies. A third surgery performed in 2020 by Dr. Mark DeLacure totally removed the cancerous tissue. She claimed that she didn’t give in to fear throughout the period. “I wasn’t quaking in my boots,” Danner noted. “I don’t have any fear of death at all.”

“She went through it with so much grace,” Gwyneth recalled. “I was amazed at how strong she was able to be.” The grandmother of four seems to be having a swell time now as symptoms of the disease are disappearing rapidly. “It’s a sneaky disease. But I’m fine and dandy now,” she said.

​​Danner took time out to reminisce about the aftermath of her husband’s death. ”You never get over that kind of loss. Bruce was the heart of our family.” She said, “And life is so much paler without him around. But grief is the price we pay for love.”

“I think we’ve all become somehow stronger. It’s a bit of a crapshoot — this disease and this life,” Danner explained while carefully evaluating her life. “But I’ve had a career, great kids and a loving husband. I’m very grateful.”

The 79-year-old has also detailed that her attention is now focused on her family, whom she dotes on, “Nothing makes me happier than the kids.” She and her children also work with the Oral Cancer Foundation, an organization which seeks to spread awareness about oral and oropharyngeal cancers.

Click for next Article
Previous article: 49 Years After Bruce Lee’s Death, Doctors Finally Discover The Real Cause Behind His Death
Next Post: Kate Hudson Celebrates Mom Goldie Hawn’s Birthday With A Sweet Tribute