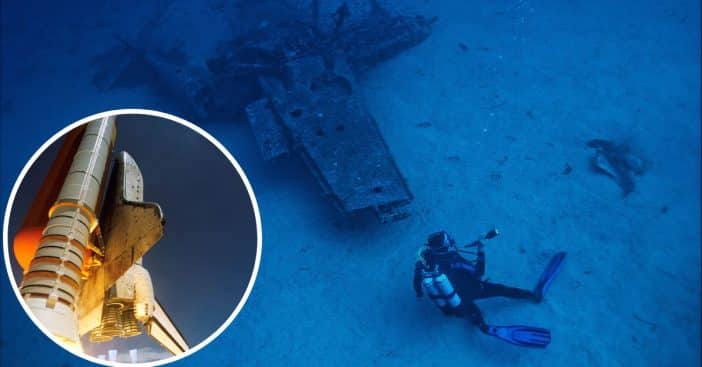 History Channel recently discovered a large piece of the space shuttle Challenger off the coast of Florida. They unraveled this great find during the shoot for their new series, The Bermuda Triangle: Into Cursed Waters.

According to the report, the exploded chunk of the shuttle from 1986 was up to 20 feet in size. After viewing the channel’s underwater videos, NASA confirmed the discovery, identifying artifacts from the Challenger shuttle.

The network shared a statement by Eli Lehrer, Executive Vice President and Head of Programming for The History Channel, which states their aim and purpose for producing the new series. “The historic and emotional discovery of this Challenger artifact by our incredible team reinforces The History Channel’s mission to preserve important sites and stories from our national heritage. Our goal for creating this series was to give a name to some of the thousands of wreck sites that call the Bermuda Triangle home and in turn share their stories, historical significance and even provide answers as to how they came to be there.”

RELATED: The True Story Behind The Challenger Shuttle Disaster — What Really Happened That Tragic Day

“While the remarkable discovery of wreckage from Challenger was not part of our diving team’s initial mission exploring the Bermuda Triangle, the find’s historical significance cannot be understated,” Lehrer continued. “The Challenger is a vital part of our nation’s history, and we are honored to bring this important finding to light.”

Mike Barnette, an underwater explorer who led the group that made the discovery revealed that as soon as they saw the artifact, they didn’t waste time before they escalated the news to NASA, who confirmed the discovery as the remains of the wreckage of their Challenger Shuttle which exploded in 1986 after about 73 seconds of taking off.

“The significance of this large section of Challenger’s structure was readily apparent. We recognized the necessity of bringing this find to the immediate attention of NASA. The site, which is outside of the Bermuda Triangle off the Florida coast, marks the loss of seven brave astronauts, and fellow explorers, and the Challenger disaster was a tragic setback for America’s space program. But from this horrific event, important lessons were learned that have ultimately led to remarkable advances in space exploration.”

In response to the discovery, NASA Administrator Bill Nelson took the time to remember the seven brave lives lost aboard the Challenger shuttle over three decades ago.

“While it has been nearly 37 years since seven daring and brave explorers lost their lives aboard Challenger, this tragedy will forever be seared in the collective memory of our country. For millions around the globe, myself included, January 28, 1986, still feels like yesterday,” he said. “This discovery gives us an opportunity to pause once again, to uplift the legacies of the seven pioneers we lost, and to reflect on how this tragedy changed us. At NASA, the core value of safety is and must forever remain our top priority, especially as our missions explore more of the cosmos than ever before.”

Also, Kennedy Space Center Director Janet Petro also paid a tribute to the Challenger warriors who lost their lives, detailing how courageous they were and how strong their penchant for knowledge was.  “Challenger and her crew live on in the hearts and memories of both NASA and the nation. Today, as we turn our sights again toward the Moon and Mars, we see that the same love of exploration that drove the Challenger crew is still inspiring the astronauts of today’s Artemis Generation, calling them to build on the legacy of knowledge and discovery for the benefit of all humanity.”

The documentary that led to the discovery of this artifact will air on History Channel on November 22, 2022. The shuttle’s remains were found in waters off Florida’s Space Coast, northwest of the Bermuda Triangle.