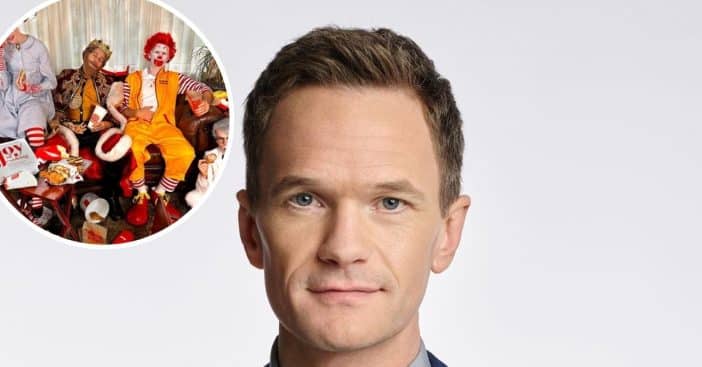 Neil Patrick Harris, his partner David Burtka, and their twins Harper Grace and Gideon Scott are known for going all out on Halloween. Fans wait every year to see what the family will dress up as. They wear amazing costumes and take a photo that looks like so much fun. This year, the family decided to dress up as fast-food mascots.

David dressed up as the Burger King, while Neil opted to dress as Ronald McDonald. Harper was Wendy while Gideon dressed up as Colonel Sanders. In the photo, they are surrounded by the fast food options from those various restaurants.

While Neil shared the incredible final photo, David also shared a look into the making of the costumes and photo. One photo shows Neil helping David apply the beard for his Burger King costume, while other photos show the 12-year-old twins being silly behind the scenes.

Neil captioned the funny photo, “Trick Or Meat Happy Halloween from the BOOrtka-Harris Family Check out David’s account – he posted behind the scene, making of pics: @dbelicious #halloween2022”

Last year, the family decided on a much scarier theme and dressed up as characters from horror movies. Neil was dressed as Norman Bates from Psycho, while David was Jack from The Shining, Gideon was the evil doll Chucky and Harper was Regan from The Exorcist.

In addition to having fun celebrating Halloween, the twins recently celebrated their 12th birthday. Neil shared photos of the kids and wrote, “Twelve years old today. Harper and Gideon are, without question, the greatest two things that have ever happened to me. They inspire me, make me chortle, allow me to be an imperfect father, and fill me with a type of love I never knew could exist.”

Click for next Article
Previous article: Harry Styles Dresses Up As Danny Zuko, Honors ONJ For Halloween Concert
Next Post: Patrick Duffy And Linda Purl Start Their Own Business Stemming From Pandemic Pastime