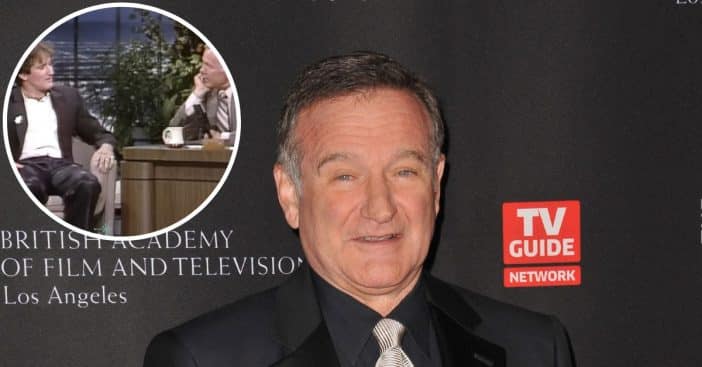 Described as one of the greatest stand-up comedians of all time, Robin Williams didn’t fail to deliver on his initial appearance on The Tonight Show Starring Johnny Carson. Although he appeared on the show nine times, he made a long-standing first impression that 30 years after the final season, many people still appreciate what a great talent Robin was.

Robin was known to be full of energy; his act on the show depicted what his biographer, Emily Herbert, expressed as an “intense, utterly manic style of stand-up [which sometimes] defies analysis … [going] beyond energetic, beyond frenetic.” He made his entrance by jumping onto the stage and greeting Carson dramatically, even to the point of kneeling — classic Robin Williams.

He started his interview on a religious note. “Believe! Believe that comedy can heal you. Praise the power,” he said enthusiastically while trying to take his seat. He then took his time to give his mother a shout-out, “Mamma, I’m on TV,” and a wake-up call to his friends in Sans Francisco.

“Don’t touch the back of the TV, or it will shock you across the room. Know the power, grab it now,” he said, trying to imitate a religious TV program. Immediately catching the joke, Carson asked, “You watch those guys on Sunday?” To which Robin gave a positive answer. Probably to steer clear of controversy, the host asked him not to mention names.

“No, no, really, but they come to your doors going, ‘Hello, here’s your Watchtower. I’d like to say hello to you.’ But I don’t want the book. ‘Take the book, it’s free.’ Take the wig off. ‘Please no,'” Robin said with the audience reeling in laughter. “Look at their hair thing,” Carson interrupted. “I mean most of their evangelists are very much how their hair looks, and they’ve got great suits and great ties.”

The Mork & Mindy actor ended the joke, “And big dead roses right here. ‘I could not save this flower, but I will save you.'”

Did he lie on the show?

Later in his life, Robin opened up about his cocaine and alcohol addiction, “Cocaine for me was a place to hide. Most people get hyper on coke. It slowed me down,” he said in an interview with People in 1988. The comedian further shed light that he stopped in 1982, because of his friend John Belushi’s death from a drug overdose, and his ex-wife, Valerie Velardi, was pregnant with his first child, Zak.

However, Carson asked him on this particular show in 1981 if he had anything to do with drugs, “When people see you, they’d probably think you experiment with foreign substances in your body,” the host questioned. “What makes you say that anyway?” Robin said while trying to clean his nose, imitating cocaine snorting. “No, because I believe cocaine is God’s way of saying you making too much money.”

Click for next Article
Previous article: George Clooney And Julia Roberts Talk About Their New Rom-Com, ‘Ticket to Paradise’
Next Post: ‘It’s The Great Pumpkin, Charlie Brown’ Once Again Won’t Air On TV This Fall