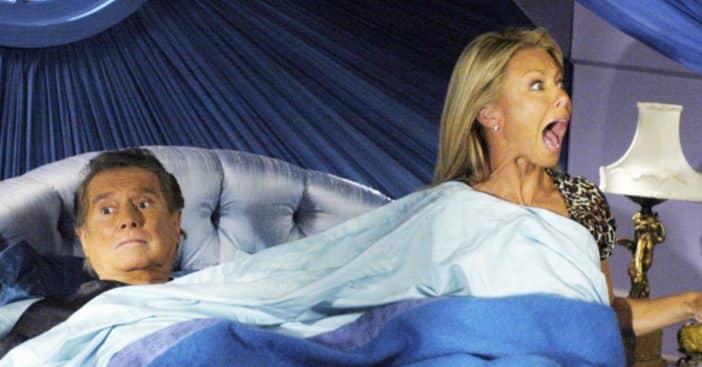 Kelly Ripa and Regis Philbin hosted a talk show for many years together until his retirement. He sadly passed away a few years ago and now Kelly is setting the record straight about their relationship in her new book.

She recently spoke about an incident that really upset her. About their relationship, she said, “There were good and bad days.” She added, “I don’t want to feel like I’m slamming anyone or that I’m being disrespectful. But I also want people to know it was not a cakewalk. It took years to earn my place there and earn things that are routinely given to the men I worked with. Including an office and a place to put my computer.”

Even though she replaced Kathie Lee Gifford as the co-host of the show, she was always told that she would never be the permanent co-host. On her first day, she said, “I came with hair and makeup. It was not an unusual thing for people on a television show to show up with.”

According to Kelly, Regis said to the head producer, Michael Gelman, in front of her, “Uh oh, Gelman, it’s got an entourage.” She continued, “I felt horrible. He was probably trying to be funny, but at the same time, it felt like a pile-on. I understand that probably he didn’t want a cohost, but the network wanted me to be the cohost and I didn’t think I should pass up that opportunity. I don’t think it was fair to him. But it was also not fair to me.”

Even though their working relationship wasn’t always easy, she said that they had lots of good times. She said, “I loved him, and I still do.”

Click for next Article
Previous article: Things You Should Never Buy At Costco
Next Post: The Cast of ‘T. J. Hooker’ Then And Now 2022