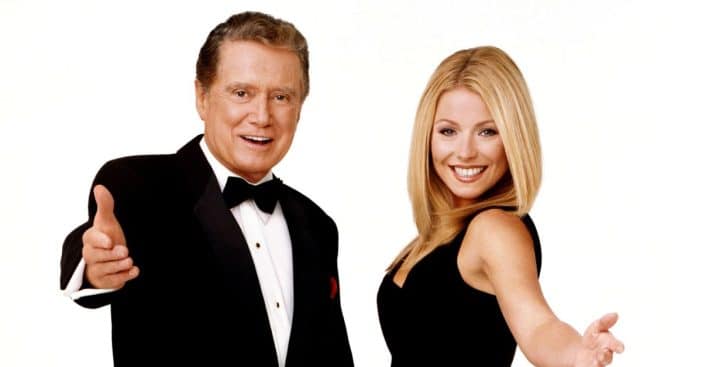 Kelly Ripa is coming out with a memoir called Live Wire: Long-Winded Short Stories. In the book, she opens up about her family life and career, including her time working with the late Regis Philbin. There were rumors of a feud between them for many years, especially when Regis retired in 2011.

Now, Kelly is able to tell her side of the story. She admitted that she was very careful when writing about Regis because he passed away in 2020. She did not want to disrespect him in any way and said she is “fully aware of his legacy.” However, she added that at the time, she was never asked her side of the story in regards to the rumored feud.

Kelly explained, “It was somehow this false narrative that I had abandoned someone that I was very close to – that we were best friends and I had abandoned him. And none of that was true. We had a very professional, working relationship. I enjoyed listening to him tell his stories more than anyone.”

She continued, “I loved that part of the show because it was not work at all. But to solely put the responsibility of maintaining a friendship that didn’t really exist (on me) … I have long-term friendships with all sorts of people I’ve worked with and nobody asks me about them ever. It’s just a very strange narrative that I found myself in that I couldn’t seem to get out of.”

These days, in addition to releasing her book, Kelly currently co-hosts the show with Ryan Seacrest. She said that they do have a friendship and their working relationship is much more balanced than her past ones.

Click for next Article
Previous article: Is Kohl’s The Next Department Store To Face Mass Closure In The Future?
Next Post: Sigourney Weaver Says ‘Alien’ Had Very Mature Scene She Demanded Removed