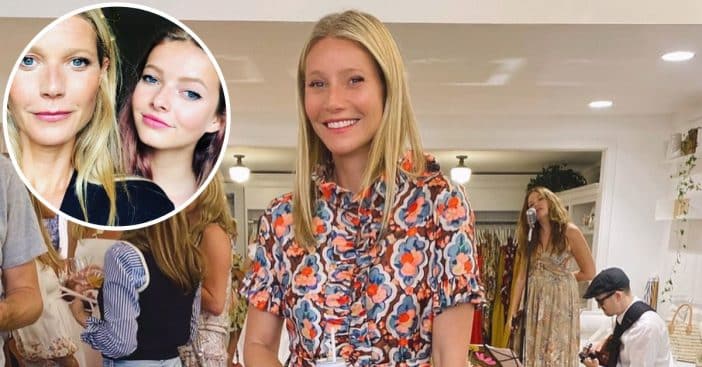 Primetime Emmy Award winner turned health wellness coach, Gwyneth Paltrow, revealed in an interview with CBS Sunday Morning the mental strength it takes to run her multi-million dollar lifestyle company and balance her home. While on the show, she was asked how she felt about her 18-year-old daughter, Apple leaving for college. “Oh wow, that is…I know it sounds nuts,” she claims. “But it feels almost as profound as giving birth.”

The 18-year-old is the exact carbon copy of her mother. Apple Martin shares striking features such as dirty-blonde hair and magical blue eyes with The Politician star. Also, Gwyneth’s fondness for fashion influenced Apple’s love for clothes and accessories.

Recently, the duo showcased their fashion sense and good looks when they both visited Gwyneth’s Goop store in Manhattan. Apple rocked a breezy white halter-neck dress, adoring her neck with layered gold necklaces while wearing a pair of black sandals. Meanwhile, The Chef Show star appeared in cool floaty capris and a crisp white shirt, donning chunky offbeat buckled sneakers while a bright orange Hermes bag hung on her shoulder.

Interestingly, the Avengers: Endgame star just hit another great milestone she is thankful for despite being in a sad mood because of her oldest daughter’s departure from home. The Goop CEO just turned 50 recently; in a celebratory post on Instagram, she expressed her mixed feelings amidst wins and losses over the months. “Summer 2022, you brought it all unsparingly. Elation, adventure, transition, joy and heartbreak alike,” she claimed. “Thank you for your reminders, connections and deepenings.”

Also, in honor of her Golden Jubilee birth anniversary, the former Saturday Night Live host appeared nude while wearing gold body paint in an image shared with her Instagram followers. “All I know is that they’re painting me gold and that I have to be naked,” Paltrow opened up about the photoshoot. “I feel so good turning 50, and this is about expressing that sense of energy and optimism that I’m experiencing. It’s more about the female gaze and just a sense of fun.”

Click for next Article
Previous article: Kelly Ripa Does Not Mention Former Co-Host Michael Strahan In New Book
Next Post: Is Kohl’s The Next Department Store To Face Mass Closure In The Future?